Emiliano Martinez who was left out of the Arsenal squad that defeated Fulham in the Premier League opening fixture has agreed a £20million deal to join Aston Villa.

The 28-year-old goalkeeper will proceed to the north London club to undergo medical by Sunday, September 13 to complete the switch.

According to UK outlet Independent, Martinez who has traveled to Birmingham is expected to sign a four year deal at Villa.

Villa who survived the drop on the final match day of last season had an initial £15 million bid rejected by the Gunners who want £20m.

A deal has been agreed between the two clubs, but Villa are understood to want Martinez in their season opener.

Martinez recently turned down an improved contract offer from the Gunners as the shot-stopper wants to be promoted as first-choice ahead of Leno at the Emirates. 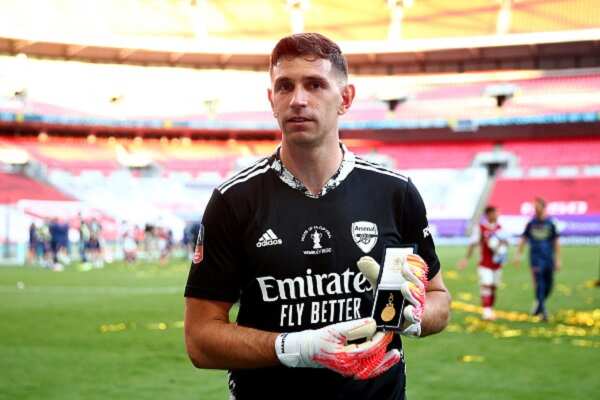 The Argentine shot-stopper will join Villa on a four-year in a deal worth £60,000-per-week.

The Brazilian who dazzled in the entire fixture also came close as he went on the hit the woodwork from a freekick in the first-half, but he gave a good account of himself on his Arsenal debut as fans go haywire about his performance.

Bioreports earlier reported that France international N’golo Kante has reportedly hinted that he is open to reuniting with former boss Antonio Conte at Inter Milan.

The duo worked together to help Chelsea win Premier League and FA Cup titles during the Italian manager’s reign at Stamford Bridge. He was also part of the Blues team that conquered Europe and win the Europa League after the triumph over Arsenal two seasons ago.

Conte is now hoping he can secure the services of the 2018 World Cup winner this transfer window.

Polycarp Orosevwotu, Ughelli AUTHORITIES of the Nigeria Police Force, at the weekend prevented Brothers Across Nigeria, BAN, a nonprofit, nongovernmental...