Don’t call anyone your best friend until…

I walked around New York the morning… 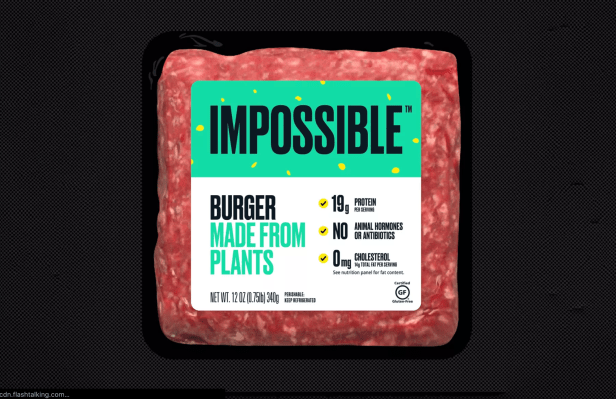 The meatless ground meat substitute will be appearing in stores across the Southern California as the first step in a phased nationwide rollout on Friday.

With the step into groceries, Impossible Foods moves into direct competition with its bigger, publicly traded rival Beyond Meat, which is already selling its patties and sausages in major stores nationwide.

Impossible Foods, which has had some supply chain hiccups as it began to increase its production in the wake of large deals with fast food chains, will be taking a phased approach to its national expansion. Expect it to begin appearing on store shelves in other parts of the country throughout the end of the year. Its next stop is going to be another store chain on the East Coast later this month, the company said.

To celebrate the debut, Impossible Foods has tapped Chrissy Teigen’s grandmother for a VIP event on Thursday night and will be handing out samples at a Los Angeles-area Gelsons on Friday.

“Our first step into retail is a watershed moment in Impossible Foods’ history,” said Impossible Foods’ Senior Vice President Nick Halla, who oversees the company’s retail expansion. “We’re thrilled and humbled that our launch partners for this limited release are homegrown, beloved grocery stores with cult followings in their regions.”

Gelsons and Los Angeles are something of a natural first stop for the company, given LA’s place in the nation’s food, environmental, and entertainment cultures.

Indeed, celebrities are some of the backers of Impossible Foods. In the company’s last, $300 million round, Jay-Z, Katy Perry, Serena Williams, Jaden Smith, Trevor Noah and Zedd all invested.

The company has set itself the goal of eliminating the need for animals in the food chain by 2035.

Already selling in White Castle, Burger King and Qdoba and is, according to a GrubHub survey, the  most popular . late-night delivery item in the U.S.

I walked around New York the morning after the city erupted in protests. Here’s what I saw