I am one of the greatest king ever liveth – Oluwo reacts to kingmakers’ call for his removal, releases new photo

19 seconds ago by
Eromosele Ebhomele

– In the heat of the controversy, the monarch releases a photograph to which seems to mock his opposers

A controversial Nigerian monarch, the Oluwo of Iwo, Oba Abdulrasheed Akanbi, has described himself as the “Greatest King ever liveth.”

Oba Akanbi made the declaration in what seems like a response to the call for his dethronement by some kingmakers in Iwo, a major town in the western part of Nigeria.

The message came with a video of some women protesting against the petition by the kingmakers demanding his sack.

The women threaten to strip themselves and curse those who want Oba Akanbi to leave the throne.

He said in the message:

“God is Great and I stay with God cos I am and must be…. one of the Greatest King ever liveth !!!”

The monarch noted that all his traducers, no matter how highly placed, had been put to shame as a result of his belief that the people of the town were behind his reign.

“With 67 more great years on the throne of my great forefathers… Ade tipe Lori Bata tipe lese !!!! God is Great.” 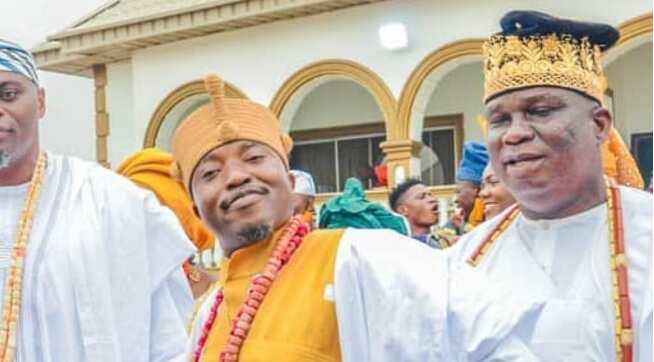 Oba Akanbi is excited that the people are behind him in his current travail
Credit: Oba Akanbi
.

The monarch, who, some time ago separated from his wife after allegations and counter-allegations, had faced different issues since taking up the mantle of traditional leadership years ago. However, he had also often surmounted the challenges.

Bioreports had reported that at least 12 kingmakers recently demanded the monarch’s removal in a petition to the Osun state government.

The kingmakers comprising of 12 chiefs wrote a petition to Governor Gboyega Oyetola of Osun state and stated that Oba Akanbi is not representing them well.

The traditional ruler, however, dismissed the call as a conspiracy led by his rival to the throne, saying it is dead on arrival, according to a report by Premium Times.