How INEC official, 39, died trying to save son from Lagos gas explosion

How to rebuild Lagos, by Agunsoye

A father of three, who tried to save his son from the gas tanker explosion that rocked Baruwa area of Ipaja, Alimosho Local Government Area, Lagos State penultimate Thursday died together with the son at a point he thought that they had escaped the tragedy, KUNLE AKINRINADE reports.

The brave act of a father who rushed into a burning building during the gas explosion that rocked Baruwa area of Ipaja, Alimosho Local Government Area, Lagos State penultimate Thursday counted for nothing at the end of the day. Thirty-nine years old Olushola Amos Adeleke and his two-year-old son, Martial, died in the incident at a point they thought that they had managed to survive the tragic incident.

No fewer than five persons were confirmed dead in the gas tanker explosion that shook the community to its foundation. The explosion had occurred at dawn when an LPG tanker was discharging its inflammable content at the Best Roof Plant Station on Candos Road in Baruwa. The explosion was said to have been triggered by the generator of the gas station, which was said to be on while the LPG tanker was discharging its content.

The explosion, which razed several vehicles and buildings, including a nursery and primary school, threw the discharging tanker across the road and spread the fire to adjoining buildings. Many residents were rendered homeless in the wake of the blast.

According to the Acting Coordinator of the National Emergency Management Agency (NEMA), Ibrahim Farinloye, three persons were rescued while five bodies were recovered from the explosion.

The rescued persons, including Adeleke and his son, were taken to a hospital after the initial first aid treatment. The 39-year-old employee of the Independent National Electoral Commission (INEC) was said to have been woken up from bed by his wife when she saw smoke billowing from the scene of the incident.

The wife was said to have rushed out of the house with their five-year-old daughter, Sharon , to avoid being trapped in the spreading fire which by then had got to their building. An eyewitness said that Adeleke had rushed out of the building just like his wife and daughter before he realized that their son was left behind in the house, hence he decided to rescue their son from the house.

He was said to have rushed back into the building and was about coming out with the son when fireballs from the burning tanker landed on him and his son, inflicting them with severe burns.

They were rushed by sympathizers to the Lagos State University Teaching Hospital (LASUTH) in Ikeja, where they were admitted at the intensive care unit (ICU). Adeleke however died from the fatal injuries in the early hours of Saturday, October 10, while his son breathed his last the next day.

Family sources described the death of Adeleke and his son as a monumental loss.

One of them said: “Shoshy, as Adeleke was fondly called by residents, was one of the illustrious youths of Baruwa. His gruesome death alongside his son is nothing but a monumental loss.

“He had rushed out of their home with his wife and daughter after his wife alerted him to the explosion in the neighbourhood. But on realising that they had left their son behind, he braved the fire to rescue his son, Martial.

“He was about taking his son out of the compound when flames from the burning tanker landed on his body and also burnt his son fatally.

“They died at LASUTH a day apart and have since been buried.”

Another resident, Fred Alade, described the deceased as “a very energetic young man who related well with other residents in his lifetime and made visible impact in youth development in the community. We will all miss him for his eager disposition to things that could uplift this community.”

Until his death, the deceased INEC official, according to impeccable sources, was planning big for his 40th birthday in February next year. He was said to have planned to move into his new house at Ajibawo in Atan part of Ado-Odo/ Ota Local Government Area, Ogun State, after a housewarming scheduled to coincide with his birthday.

“Unfortunately, his remains were interred in the same house he had planned to open with fanfare on his 40th birthday.”

“He is survived by an aged mother, wife and two children,” the source added.

The deceased was described as an unassuming young man and ardent fan of the English Premier League team, Manchester United.

His love for the top English team, popularly called ‘Man U’, was said to have made him to name his son after the club’s centre forward, Anthony Martial.

“Adeleke’s love for ‘Man U’ was second to none. So much so that he named his son after the team’s mercurial player, Anthony Martial,” a resident who identified himself simply as Omowale told The Nation.

However, contrary to the official casualty figure released by NEMA, investigation revealed that no fewer than 10 persons lost their lives in the fire disaster.

Like Adeleke and his son, a 79-year-old, Pa Broderick Unuajohwolia, and his 39-year-old son, Otuene Unuajohwolia, also died in the blaze. The aged man and his son were said to have been trapped and died from the flames of fire that engulfed their apartment.

The list also includes a 36-year-old woman, Ayo Aderinsoye, and her two children, Olamikun Aderinsoye, 4, and Mowa Aderinsoye, 2, while the identity and whereabouts of the woman’s husband could not be ascertained at press time. 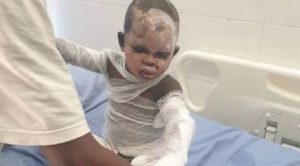 Others include Mohammed Abubakar and an unidentified security man killed by the ravenous fire.

A special interdenominational memorial service at the instance of community leaders was held in the evening of Thursday October 15 in honour of the deceased victims at the scene of the explosion at Unity Bus Stop, Baruwa.

At the event, various Christian and Muslim clerics offered prayers for the repose of the victims’ souls amid outpouring of emotions by residents, community and political leaders who attended the ceremony hosted by the traditional ruler of the community, Chief Khalid Baruwa.

“We organised the memorial service to honour the victims of the gory incident as well as to pray against a reoccurrence of the incident in the community,” a leading member of the community’s development association, who did not want his name mentioned, said.

Lagos has witnessed a number of gas explosions with heavy loss of lives of property since the beginning of this year.

In March this year, about five persons including students were reportedly killed in a gas explosion that also ravaged buildings, including Bethlehem Girls College, and vehicles in Ado Soba village in Ojo Local Government Area of the state.

Barely three weeks ago, an explosion caused by a gas tanker swept through Ajuwon area of Iju-Ishaga, a Lagos suburb, killing a number of residents, while no fewer than 30 persons were injured and 23 buildings destroyed.

Emmanuel Oladesu THE Association of Retired Lagos State Heads of Service and Permanent Secretaries (ALARHOSPS) on Thursday urged Lagosians to...

How to rebuild Lagos, by Agunsoye

Buni and challenge of reconciliation in APC

No virtue in killing ourselves, says Gbadamosi