Food and Health Secretary Sophia Chan announced in a press conference Tuesday that people will be able to dine in at restaurants until 10 p.m. with up to four people per table.

Restaurants in the city were previously open until 6 p.m. with only two people allowed per table.

This is the lowest number of cases Hong Kong has reported since November 18, according to official government statistics. The city has reported a total of 10,788 cases and 193 deaths since the pandemic began according to Johns Hopkins University.

Heavy snowfall in the Greek capital of Athens caused Covid-19 vaccination centers to halt their work on Tuesday.

Residence on the Attic peninsula, which encompasses Athens and its countryside, have been warned against any against non-essential travel in the area due to “intensifying” weather conditions.

Canada vowed to protect its Indigenous women. But they are still being blamed for their own deaths

Vaccination Of Buhari, Osinbajo In Pictures

The UK will facilitate other countries’ Covid-19 vaccine passports plans, although it is not planning to introduce them domestically, UK vaccine minister Nadhim Zahawi told the BBC on Tuesday.

“Internationally, if other countries will require a vaccine certificate, then I think it’s right that we facilitate it,” Zahawi said, “that’s what we are working on.”
“We’re not looking at the domestic use of vaccine passports, that’s not in our planning. As the prime minister described, it’ll be the national vaccination programme combined with rapid testing that I think is the way forward,” Zahawi added.

Zahawi added that the UK government plans to make immunization and vaccination records available to citizens via a National Health Service (NHS) app if they need to travel internationally.

When asked about the supply of vaccines, Zahawi said that he was expecting “much greater volume in March and April, tens of millions of doses coming through,” adding that he’s confident the UK will meet the target to give the first vaccine dose to 32 million people in top nine priority groups by the end of April.

The UK has been hard-hit by the pandemic and has the highest Covid-19 death toll in Europe.

The introduction of Covid-19 passports — documents proving that the traveler has been vaccinated — remains a contentious concept.

Calls from several European countries to create an internationally recognized vaccination certificate prompted the European Union to debate the measure in January.

While some states argue that reopening borders and frozen sectors of the economy with the help of Covid-19 passports would be crucial in 2021, fears remain over what protection various vaccines actually afford, how the certifications might be abused and what it means for those still awaiting shots.

In discussions last month, some EU members expressed concern that vaccine certifications may result in the unvaccinated being treated as second-class citizens who are refused certain services.

Elementary schools in California’s Los Angeles County have been cleared to reopen for in-person learning starting Tuesday, after county health officials announced they expect to reach the state’s Covid-19 case threshold for reopening those campuses.

“The state permits elementary schools to reopen as soon as we reach an adjusted case rate of 25 per 100,000,” the Los Angeles County Department of Public Health said in a news release on Monday.
“We are informing Los Angeles County schools tonight via an emailed letter that we expect to announce we have reached this threshold effective Tuesday, February 16.”

County health officials say that while Covid-19 numbers are declining, “the virus is still very much present and circulating widely” across the county and they urged residents to remain cautious. 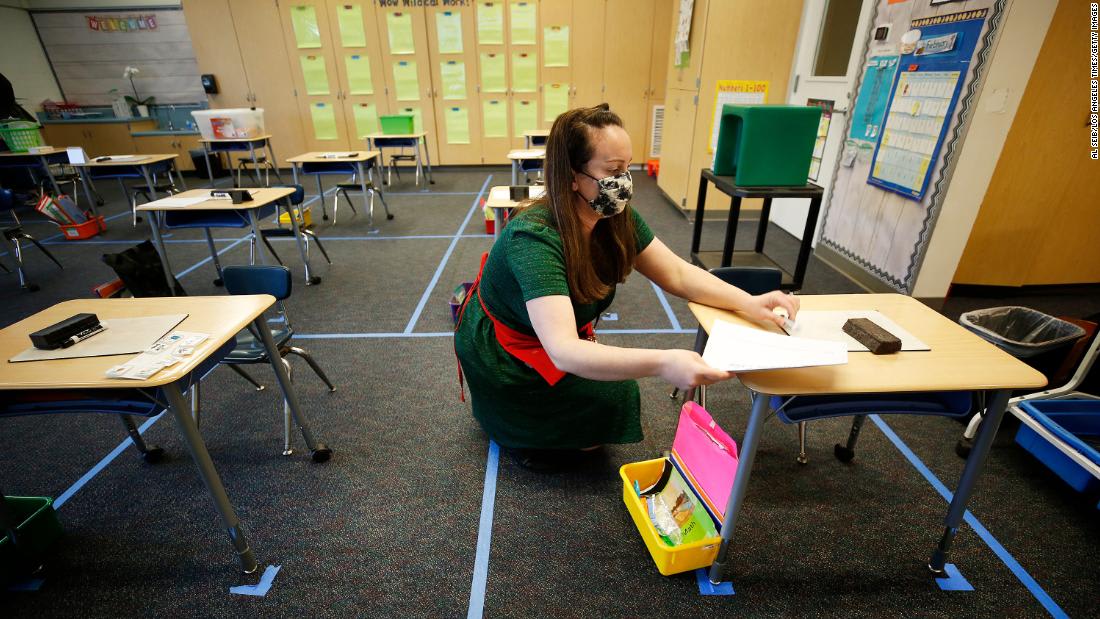 The government in the Netherlands must “immediately” lift a nightly curfew designed to reduce coronavirus infections, a court in the country has ruled.

A judge in The Hague upheld a claim from the foundation viruswaarheid.nl, which means “virus truth.”

The curfew has has been in effect nightly from 9 p.m. to 4:30 a.m. since January 23. The Dutch government earlier this month extended the curfew to remain in place until at least March 3, claiming that the restrictions have been successful in reducing social interaction.

The judge said Tuesday that the implementation of the curfew did not meet the requirements of “special urgency” required to bypass the normal legislative process. The judge also ruled that the government’s use of the “extraordinary powers of civil authority” act was “not legitimate.”

“The curfew is a far-reaching violation of the right of freedom of movement and privacy and limits [indirectly] among other things the rights to freedom of assembly and demonstration. This makes a very diligent decision-making process necessary,” the judge said.

In response, the Dutch Ministry of Justice said it was “studying” the ruling.

“We cannot say more about it yet,” spokesperson Anna Sophia Posthumus told Bioreports in a statement Tuesday.

The Netherlands has reported more than 1 million total Covid-19 cases since the pandemic began and almost 15,000 deaths according to Johns Hopkins University.

The Israeli Cabinet has approved a further loosening of the restrictions on economic activity as coronavirus infection rates continue its gradual downward trend.

From Sunday, shopping malls, markets, museums, and libraries will re-open to everyone. But Israelis will need to show proof they have been vaccinated, or have recovered from the disease, to gain access to gyms, sports, cultural venues and hotels, all of which have also received permission to re-open.

Schools will also be allowed to welcome back more students.

Israel has been making rapid progress in its vaccination program and is on track to be the first country in the world to inoculate its entire population, of about 9 million people.

Health Ministry data suggests more than 4 million people in Israel will have received their first dose of the Covid-19 vaccine by the end of Tuesday, with more than 2.6 million people having received a second dose as well.

For the first time in a long time, the US is reporting encouraging Covid-19 trends.

And California, one of the states hit hardest by the pandemic, reported its lowest daily case increase since early November. That comes amid a steady decline not only in new infections, but in hospitalizations and deaths as well.

In New York, Gov. Andrew Cuomo reported a decline in infection and hospitalization rates, saying the state was now past a “post-holiday surge.”

“If we’re able to keep the momentum headed in a positive direction by practicing safe behaviors at an individual level, as well as continuing to vaccinate New Yorkers as quickly and fairly as possible, we’ll be able to reach the light at the end of the tunnel faster than previously thought and finally get some normalcy back into our lives,” Cuomo said in a statement Monday.

It is good news to see the Covid-19 numbers heading in the right direction. But numbers are still high.

And experts worry that if Americans let their guards down — especially now with variants circulating — there could be another surge coming. 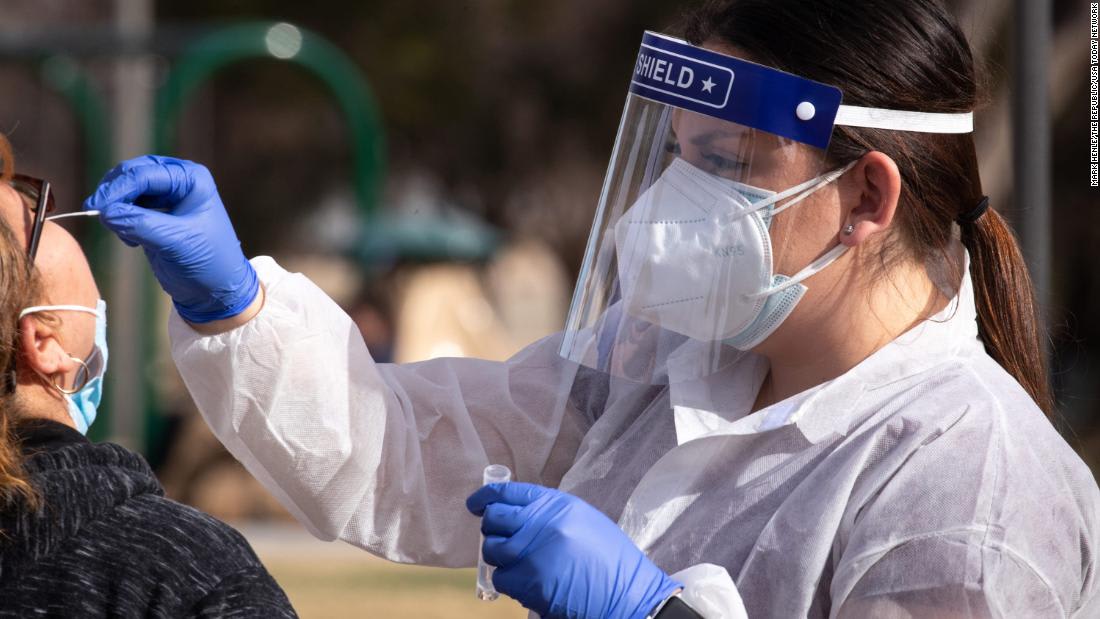 UK vaccine minister Nadhim Zahawi has warned of a “tsunami of disinformation and misinformation” around Covid-19 vaccines and said that the UK government is in contact with technology companies in an effort to “take down some of this fake news.”

When asked about reports of vaccine hesitancy in ethnic minority communities, Zahawi told British broadcaster Sky News on Tuesday that “it’s very important that we continue to deliver accurate information in people’s own languages.”

He added that the government is translating its guidance into 20 languages “to reach those hard to reach groups.”

The minister also said that around 89% of the UK’s adult population are prepared to take a Covid-19 vaccine.

“The 11% that are vaccine hesitant, or have questions, skew heavily towards some of the ethnic communities, the Black and African Caribbean communities, the Indian and Pakistani and Bangladeshi communities, and we are working with those community leaders, we’ve put £25 million ($35m) to work through local government,” Zahawi added.
“We know that [ethnic minority] communities are disproportionately impacted by this virus so come forward and take the first dose,” he said, adding: “We’ll make sure that we will accommodate any issues around Ramadan or any other religious festival, to make sure that you can get your second dose safely and in the correct way.”

Only critical workers will be able to travel to the Arctic nation and even they need to secure special permission to travel from Greenland’s government before making the trip.

People entering the country need take a Covid-19 test no earlier than 72 hours before travel. They are also required to isolate for 14 days on arrival and to take a test on day five.

Greenland has a population of around 56,500 people. It has reported 30 coronavirus cases since the beginning of the pandemic and zero deaths.

Adidas is selling Reebok to focus on its own brand