– The photos made people believe that she is carrying another child

Nollywood actress Tonto Dikeh recently got her fans and followers into believing she was pregnant for a moment until she showed them what was hiding under her dress.

Donning a beautiful kaftan, the actress shared photos showing her stomach was swollen like that of a pregnant woman.

One would easily believe that the film star was indeed carrying a baby as one of the photos seemed to show her big navel. 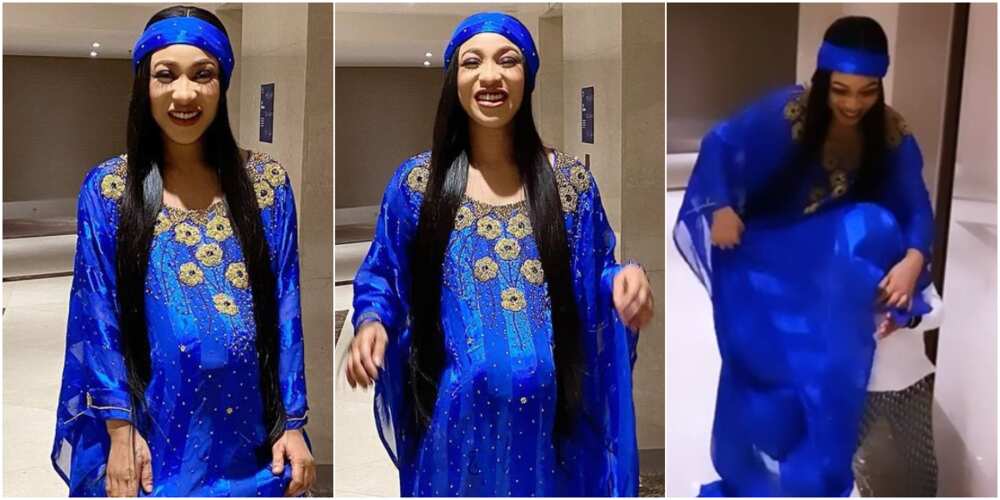 In the caption that accompanied the photo, Tonto then urged her followers to comment when they see what she’s hiding.

Check out the photos below. Swipe left to see more:

As expected, some fans were already congratulating the actress as they believed that she was carrying a baby.

“Our Duduke is here. Hallelujah.”

“Have seen it o. Congrats.”

An hour later, the actress shared a video showing her son Andre hiding under her lovely outfit.

The video showed the mother and son having fun as the actress laughed at their little prank. Andre seemed to be enjoying the prank as he did not want to leave his position under his mother’s dress.

In other news, Bioreports earlier reported that Tonto Dikeh said she forgave her ex-hubby Olakunle Churchill because of their son.

In an interview with journalist Dele Momodu, the film star said the Bible spoke about forgiveness and she admitted that it never really had an impact on her until someone explained it.

On whether she has forgiven her son’s father, she had this to say: “Oh yes, especially him. I forgive him and wish him the best, for my son’s sake. I do. Why not?”

I have done it already, Funke Akindele tells man who prophesied death for her if she does surgery

By Nduka Chiejina, Abuja The Central Bank of Nigeria (CBN) is targeting $2 billion monthly from diaspora remittances. This follows...

Peju Akande’s ‘Tales from the Street’