53 seconds ago by
Sola Oloruni

The video of a new Nigerian bride identified as Igwe Etomchi Chimdi and her groom has got people talking on social media.

The video which was spotted by Bioreports on Instagram revealed a new couple as they danced at their traditional wedding ceremony.

Donned in beautiful red and white attires and surrounded by their guests, the couple danced gently until the DJ played a song called Skeleton Move by Master KG and they went wild. 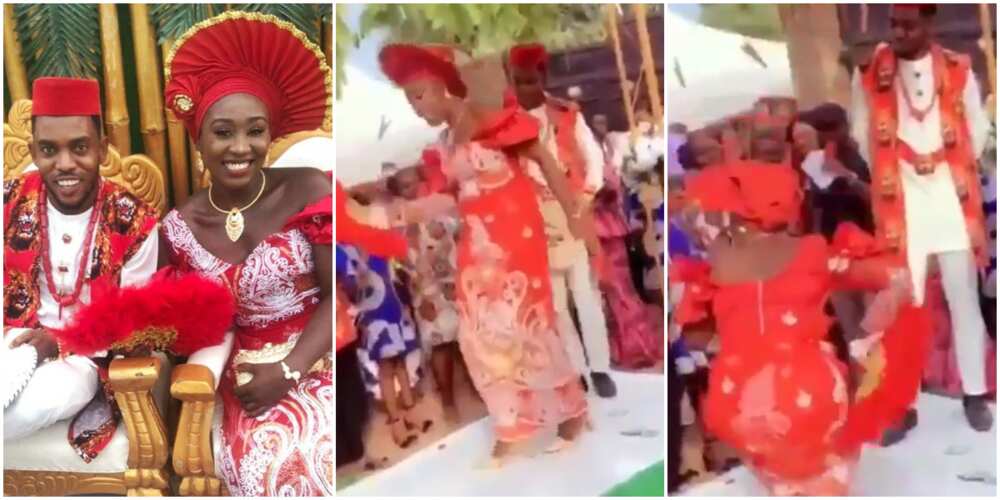 It was as though the bride was waiting for that song to come up as she showed off her dance steps. Not even her wrapper could stop her from raising her legs, or bending down to show more steps.

In fact, at a point, her husband stood with arms akimbo to watch his wife take over the dance floor while he nodded his head in approval.

Watch the lovely video below:

Nigerians were amazed by the bride’s energy as they reacted to her dance steps.

“Ahhhh.. this one is on another level biko.. even with George wrapper… haaa.”

“E for Energy, the groom had to give up, he saw a better dancer.”

“Was even praying for her not to fall… Good one though.”

“Stepper even on wrapper.”

“See her Bobo is so proud of her.”

In other news, Bioreports earlier reported that actress Khadijat Ayoade flaunted her ring as she gets engaged.

The excited filmmaker noted that she was not a public display of affection kind of person.

She, however, admitted that she was a great fan of love and she is an emotional teddy bear when it comes to relationships.