The ballet-obsessed five-year-old girl has been battling cancer and the nurses thought it wise to come up with the best dance moves to cheer her up.

In a video shared by Daily Mail, the hospital staff identified as Dr Baylon Kamalarajan and colleague Emma Mander could be seen tiptoeing while wearing official ballet outfits. 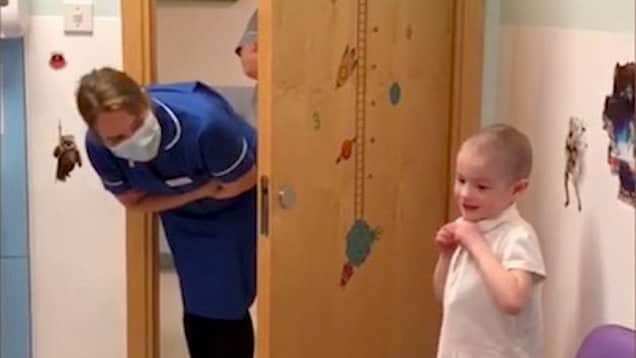 The video showed the little girl smiling as the nurse attempted to spin to the theme music.

She also took part in the dance and spun round to show the two kindhearted nurses how the dance is done.

Emma and Baylon performed various ballet positions to the beaming girl who looked excited throughout the performance.

Fletcher has been undergoing chemotherapy treatment for acute lymphoblastic leukaemia after she relapsed earlier in the year.

“When Ballet-mad Izzy came into our Children’s Clinic for her cancer treatment on Friday, two of the team surprised her with a very special routine… Huge thanks to Baylon and Emma for the lovely surprise, and well done Izzy for *literally* keeping them on their toes!”

The two boys show off their amazing synchronisation and dance skills with each having a solo at different times. At the 30-second mark a third boy, with a white t-shirt, joins in but does not stay for too long.