– After 34 years of separation, Martin decided to move in with a new wife, Proscovia Nabirye

– However, Norah, 58, stormed the church on the wedding day and attempted to stop the proceedings

A flare of dramatic scenes was witnessed at a local church in Jinja after a woman disrupted a well-organised wedding of a man she claimed was her husband.

At the middle of the colourful church function ordained to bring together Martin Tibalira and his newly found love, Proscovia Nabirye, as wife and husband, a 58-year Mary Baseka Norah stood distinctly tall at the centre of the altar and opposed proceedings.

Norah, a tall, slender, and visibly weary dark woman had donned a flowery African dress. She faced the church leaders and told them the man they were about to allow him to exchange vows was her legal husband. 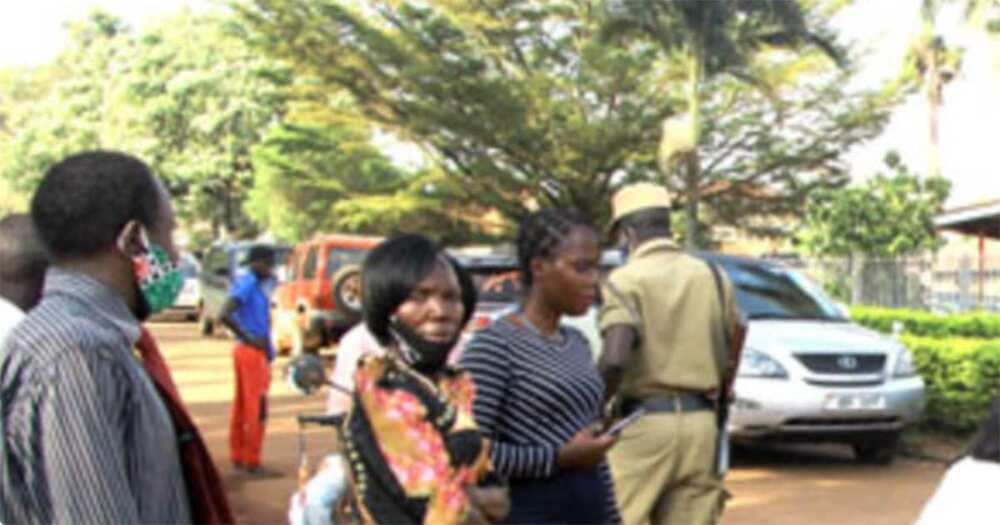 Norah Baseka (centre with flowery dress) outside the church after she was whisked away by police officers. Photo: Daily Monitor.
.

Hundreds of congregants who had turned up to witness the wedding were left in awe as the church leadership strived to take charge of the situation.

According to Daily Monitor, Norah got married to Tibalira on March 28, 1981, but they separated in 1985 over the latter’s promiscuous actions.

The couple sired two children, all daughters, who accompanied their mother to the church to stop the marriage.

The estranged wife argued despite separating with her husband in 1985, they never formalised the process. Inside a church building. Photo: The altar.
.

Upon realising things were completely taking an ugly turn, the church sought the intervention of police officers who stepped in and hounded Norah and her daughters out of the church.

Dejected and seething with rage outside the church premises, Tibalira’s former wife accused the church of failing to adhere to the doctrine of marriage and wedding by allowing a married man to enter into another marriage without formalising divorce for the previous one.

“I am here to stop my husband from marrying another woman because we are still legally married. However, I’m surprised to see police hounding me from the church yet I would think they are supposed to protect me.

To the best of my knowledge, church rules provide that Tibalira is not allowed to marry another woman unless we are divorced,” she said as quoted by Daily Monitor.

Prior to storming the church, the 58-year-old woman claimed she had tried to reach out to church leaders to address the matter in private but they ignored her concerns.

“When I went to the church leaders, they paid me a deaf ear. They said they would continue with the wedding plans. I thought they were joking until I heard his name being mentioned during marriage banns,” said Norah.

Married to another man

When reached for comment, Tibalira who is a well-established businessman in Jinja regretted the disruption but maintained nothing would change as he had made up his mind to move in with Proscovia.

“The best she should have done is to come to me but not to the news writer who cannot solve my marriage issues,” he said.

Reports indicate Norah had already moved in with another man and had given birth to three more kids.

Earlier Bioreports reported about a related incident where a bride was abandoned by her groom at the altar on the wedding day.

Sasha Aristide fell in love with Kevin Hyppolite and they stayed together a life full of fun until the wedding day came.

Kevin lied to Sasha, who had arrived at the altar, that his Uber had delayed but was on his way.

He, however, failed to show up completely, grounding the wedding ceremony.

What do all sides get from the Sudan-Israel deal?