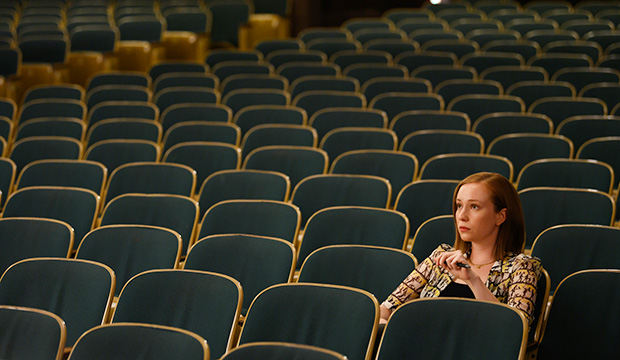 The Deborah and Ava Comedy Hour may just continue at the Emmys. While Jean Smart has been ensconced in the predicted Best Comedy Actress lineup for a month, her “Hacks” other half, Hannah Einbinder, had been on the outside looking in in the supporting actress race. Until now. Since ballots were released Thursday, Einbinder has risen two spots to seventh place in the odds.

The surge is doubly noteworthy because the comedy supporting actress category will have one fewer spot than last year — seven instead of eight — due to the proportional rule. The newcomer had slowly been climbing up the ranks as “Hacks” was airing over the past month, circling around the 10th spot. Since last Sunday, Einbinder has climbed four spots, jumping over over Kathleen Turner (“The Kominsky Method”) and Naomi Ackie (“Master of None”) before passing Paula Pell (“Girls5eva”) and Aidy Bryant (“Saturday Night Live”) after Thursday. She now stands at 22/1 odds with one Expert, Tim Gray (Variety), predicting her to win over heavy favorite Hannah Waddingham (“Ted Lasso”). Kate McKinnon (“SNL”), Rosie Perez (“The Flight Attendant”), Juno Temple (“Ted Lasso”), Cecily Strong (“SNL”) and Zosia Mamet (“The Flight Attendant”).

SEE Is an Emmy nomination within reach for ‘Hacks’ breakthrough star Hannah Einbinder?

Einbinder’s upward trajectory follows Smart breaking into the comedy actress top two and “Hacks” cracking the comedy series top four. The HBO Max comedy has been a low-key word-of-mouth hit and one could also imagine people waiting to binge all 10 episodes of the first season after the finale dropped June 10.

Perhaps if Einbinder, a comedian who’s making her acting debut with “Hacks,” were more well known she would’ve already been in the top seven by now. The show is very much a two-hander between Smart’s legendary comedienne Deborah Vance and Einbinder’s canceled comedy writer Ava, who’s hired to freshen up her material. But we’ve seen before when the less established actor goes supporting only to miss for the first year. That happened to Rose Byrne, who was the lead on “Damages” in the early seasons, but went supporting while Glenn Close went lead and won for the first two seasons. Byrne got nominated in supporting for Seasons 2 and 3. It’s also happened with double lead contenders: Sandra Oh got in for the first season of “Killing Eve,” but Jodie Comer didn’t get shortlisted until the following year, when she went on to win.

That fate could still befall Einbinder, but with the buzz and adoration for “Hacks” continuing to grow, she’s more likely to make it in than not right now. Or you could look at it as: If you love “Hacks” and Smart, you’re probably also going to check off Einbinder.

Make your predictions at Gold Derby now. Download our free and easy app for Apple/iPhone devices or Android (Google Play) to compete against legions of other fans plus our experts and editors for best prediction accuracy scores. See our latest prediction champs. Can you top our esteemed leaderboards next? Always remember to keep your predictions updated because they impact our latest racetrack odds, which terrify Hollywood chiefs and stars. Don’t miss the fun. Speak up and share your huffy opinions in our famous forums where 5,000 showbiz leaders lurk every day to track latest awards buzz. Everybody wants to know: What do you think? Who do you predict and why?

‘Asamoah Gyan Is A Lazy B!tch’

If You Think Sarkodie Will Ever Win A...

Fake Dollars Are Accepted In My Music Video

Our Marriage Will Take Ghana To The Next...

I Am Disappointed Akufo-Addo Didn’t Appoint Me –...