– South African philanthropist, BI Phakathi, has blessed an elderly lady who lived in a deteriorating house

South African Good Samaritan, BI Phakathi, has once again shown why he is regarded as one of Mzansi’s kindest people.

The faceless hero often blesses South Africans, no matter their age, race or backgrounds. Now, his kindness has reached to Swaziland.

BI revealed he and his team helped a grandmother who lived in a mud house. He wrote on Facebook:

“Thank you to my team in Swaziland who partnered with us in building an old lady a house, this is the outcome, all glory be to the most High.” 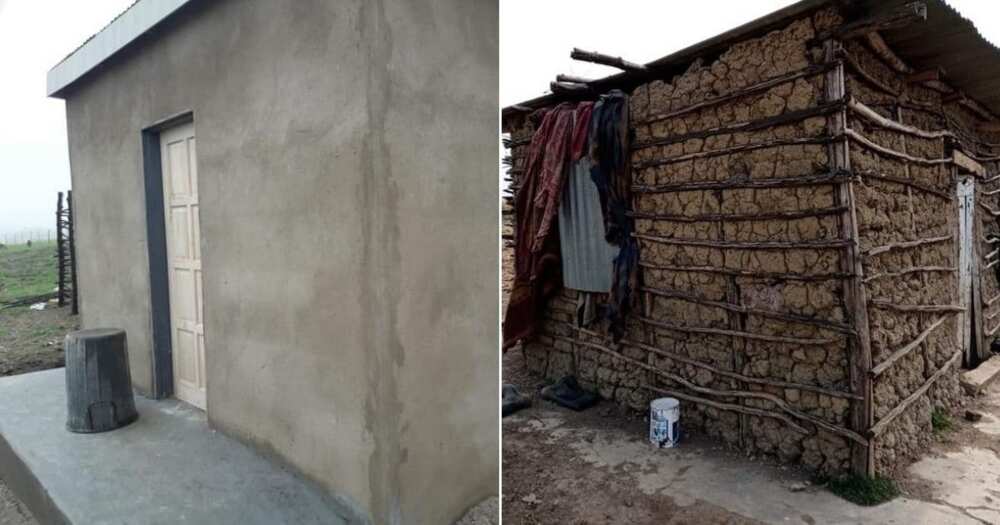 BI Phakathi built a house for a gogo who lived in a deteriorating mud house.
Photo: Bi Phakathi / Facebook
.

More than 84 000 people reacted to the post and they applauded BI Phakathi’s kindness in the comment section.

“You are God-sent BI, may you be blessed abundantly and be protected.”

“You are such an inspiration, hope others will learn from you thank and keep on doing the good work, God is your strength.”

“That is just awesome… I often think that that is better than just giving out money. But well done. I will offer my services in such a project for you if ever you do one here in KZN.”

“Yhoooooo this is now what I wish to see myself doing… Helping others in this manner… Giving dignity to those who need it the most… You are such an inspiration and well this is an upgrade you are going far… Blessed is the hand that giveth than the one that receive.”

“We thank God for people like you sir. May the Lord continue to use you more than ever before. May continue to bless your hands.”

Meanwhile, South Africans are coming to love the popular Good Samaritan for his many examples of benevolence. It was reported that Bi Phakathi had previously come across two homeless men and blessed them abundantly.

Upon hearing that they had little food to eat, Phakathi treated them with lunch and bought groceries. On Thursday, Phakathi shared another touching video via his Facebook page and Bioreports noted that it’s been viewed nearly 500,000 times.

You will get justice – Sanwoolu visits family of man killed in Surulere EndSARS protest (photo, videos)

By Daniel Adeleye A non-governmental organisation, Human Development Initiatives has enjoined Nigerian government at all levels to devote more percentage...