– After 26 years of AFCON glory, Siasia claims the players are yet to be rewarded

Samson Siasia has lamented federal government’s inability to fulfil the promise made to the Super Eagles squad 26 years ago after winning the 1994 Africa Cup of Nations (AFCON) tournament in Tunisia.

Nigeria conquered the African continent to win the prestigious tournament for the second time beating Zambian 2-1 in the final, thanks to a brace by Emmanuel Amuneke.

The heroes returned home to glorious welcome and warm reception by then Nigeria military ruler Sani Abacha who immediately promised a house each to reward members of the squad as well as officials.

“We didn’t get any reward. No; nothing, up till now, nothing,” Siasia told Bioreports in a live Instagram chat.

Recall that on May 27, 2019, Nigeria’s Minister for Works and Housing, Babatunde Fashola, asked for an immediate presentation to his ministry, the promise made to members of the 1994 AFCON-winning Super Eagles team.

He made the request while presenting, on behalf of government, documents of an apartment allocated to former Super Eagles Chief Coach Clemens Westerhof. 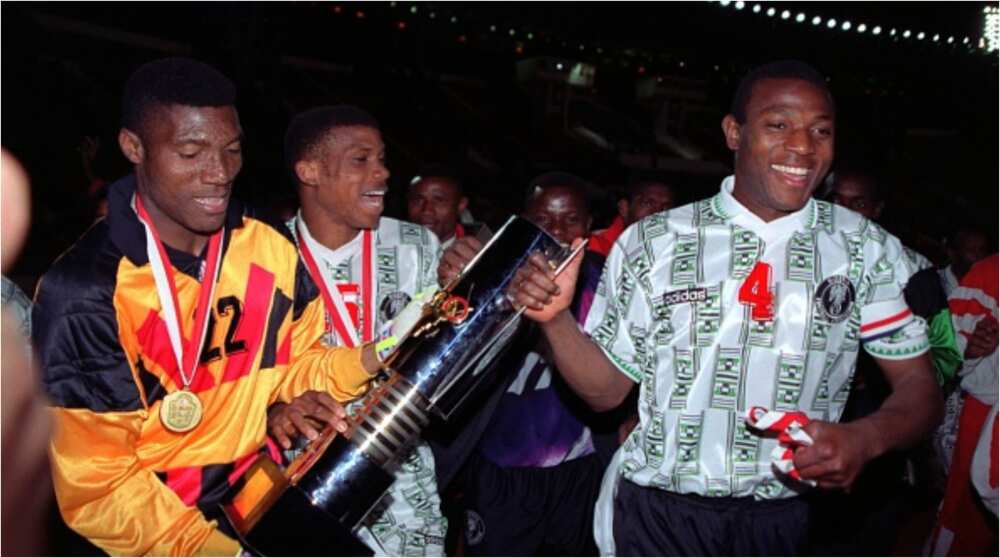 He ordered the Nigeria Football Federation (NFF) to immediately document names and details of members of the team who were yet to have the promise made to them fulfilled.

Siasia continued: “All they did was call Bonfrere (Jo) and Wersterhof (Clemens) and gave them land documents which Fashola did almost a year ago.

Just in: Sensational header by Jamie Vardy enough as Arsenal lose at home to Leicester City

“But we that live here in Nigeria don’t even have any document to show that ‘this is our reward’ after 1994 Nations Cup.

“I think it’s all sectors of the Nigerian government; the NFF and other sectors and all that, the Ministry of Sports and all that.”

Meanwhile, Bioreports earlier reported that Samson Siasia was handed a lifetime ban by the world’s football governing body Fifa for allegedly breaching article 11 of the organization’s Code of Ethics.

The body claims that the former Nigerian coach was found “guilty of having accepted that he would receive bribes in relation to the manipulation of matches in violation of the Fifa Code of Ethics.”

The appeal hearing was initially fixed for March 19, 2020, but it has been postponed until October 6 due to the wake of the coronavirus spread.