– Top actress, Omotola Jalade took to Instagram to celebrate only Peter on the special occasion

– This led to another actress, Oluwabukola Arugba chiding Omotola as she advised her to also celebrate Paul

Top Nollywood actress, Omotola Jalade Ekeinde, recently came under fire on social media for celebrating only Peter Okoye on his birthday and snubbing his twin brother.

It is no longer news that the PSquare twins are no longer on good terms and fans have been trying to patch things up between them.

On November 18, 2020, the duo clocked a year older and fans took to social media to celebrate them on the special day.

However, Nollywood actress, Omotola, did things a bit differently as she posted only Peter’s photo on her page and accompanied it with a birthday message.

In her caption she wrote:

“Happy birthday to a great friend. @peterpsquare . Almost missed your day! Wishing you a day as happy as you.”

Fans and colleagues waited to see if she would celebrate his twin brother in a subsequent post but that did not happen and some of them took to her comment section to scold her.

Another Nollywood actress, Oluwabukola Arugba in her comment told Omotola to also celebrate Paul. She added that she understood Peter was her friend but that it would be better for her to celebrate both twins. 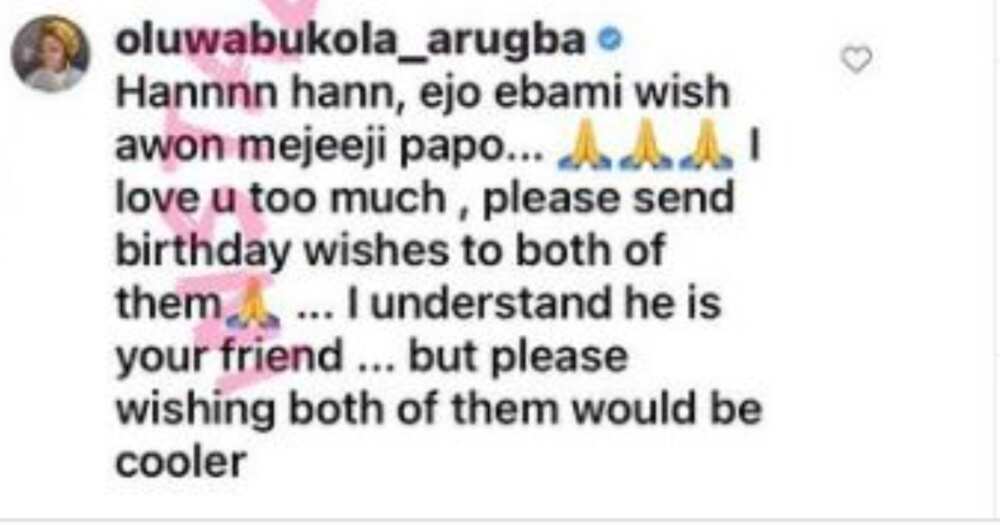 Oluwabukola did not think it was cool that Omotola celebrate only Peter and ignored Paul on their birthday.
Photo: @realomosexy.
Source: Instagram

Oluwabukola’s comment led to a debate on social media as people either agreed or disagreed with her opinion.

May be she’s close to only Peter…she has the right to.

And the other actress is a mother of twins,I guess that made it a lil emotional for her. lol.

But what is her business now???..is she the one that separated them.

This omotola Dey Do like say she no get sense sometimes.

Nice lady…. coming from a mother of twins herself.

Bioreports had earlier reported that Peter Okoye’s wife, Lola, took to social media to advice the PSquare brothers on their birthday.

In the caption that accompanied the photos she shared online, Lola stated that Peter and Paul are brothers whether they like it or not. According to her, they are also twins.

Read what she shared below:

“Life is short, make the best of it! Respect and Love should be sacrosanct! As we get older we should realize that life is precious and time waits for no one. My 2 cents!.”

Car no be property, singer Duncan Mighty laments as his Porshe develops a fault (photo)