A Kazakhstan bodybuilder has left the world in bewilderment after getting married to a doll.

Bioreports has learnt that Yuri Tolochko married his beautiful doll fiancée Margo in a traditional ceremony.

According to The Sun, the ‘wedding’ was official as it had a dozen excited guests who could not keep calm after watching Yuri’s romantic first dance with his doll. 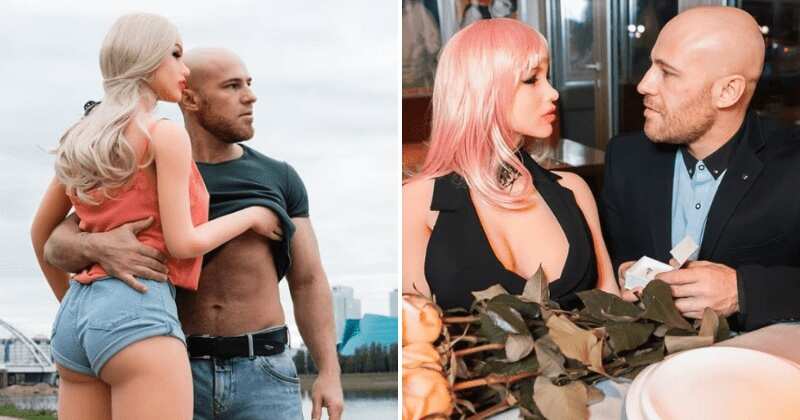 Yuri got married to the doll after dating for months. Photo: The Sun
.

Bioreports accessed a video from the event which was posted on Instagram and it showed how stunning Yuri looked in his smart black dinner suit and bow tie, with his ‘bride’ rocking a lacy white wedding gown.

In the video, Yuri is seen slipping a ring onto Margo’s finger before the pair share a passionate kiss in front of a crowd of excited wedding guests.

The groom shared the footage of the unusual celebration on his Instagram page, followed by the caption:

“It’s happened. To be continued.”

While many people who commented on the post congratulated the bodybuilder, some wondered why anyone would marry a synthetic doll.

The marriage may have come as a surprise to many and unconventional but it has been in plans since December 2019 when Yuri first popped the big question to his beloved doll girlfriend.

According to Yuri, they were already deeply in love when he went down on one knee. He disclosed he first met Margo the doll at a night club where he rescued her from unwanted attention.

The ‘couple’ were supposed to get married in March but was forced to postpone due to the coronavirus outbreak.

In other news, a Nigerian lady identified as Bolanle Banwo got people talking on Twitter after announcing that she got married to her best friend.

Bolanle shared a loved-up photo of herself and her husband and tweeps flooded the comment section of her post to wish her a happy married life.