The Soun of Ogbomoso, Oba Oladunni Oyewumi Ajagungbade III, has rejected the N100 million pledge by Governor of Oyo state, Seyi Makinde, for the renovation of his palace.

It was reported that during one of EndSARS protests in the town, angry youths invaded the palace of the Oba and destroyed some properties over the death of Jimoh Isiaq.

The governor visited the Ogbomoso king after the incident and pledged a huge sum of N100 million and this got some people reacting on social media.

Appreciating the governor for his kind gesture, the king stated that there would be no need to disburse the huge sum for the repair of his palace.

According to My Woven Words, the Ogbomoso king stated that the sum of N10 million that was immediately disbursed after the attack was fine. 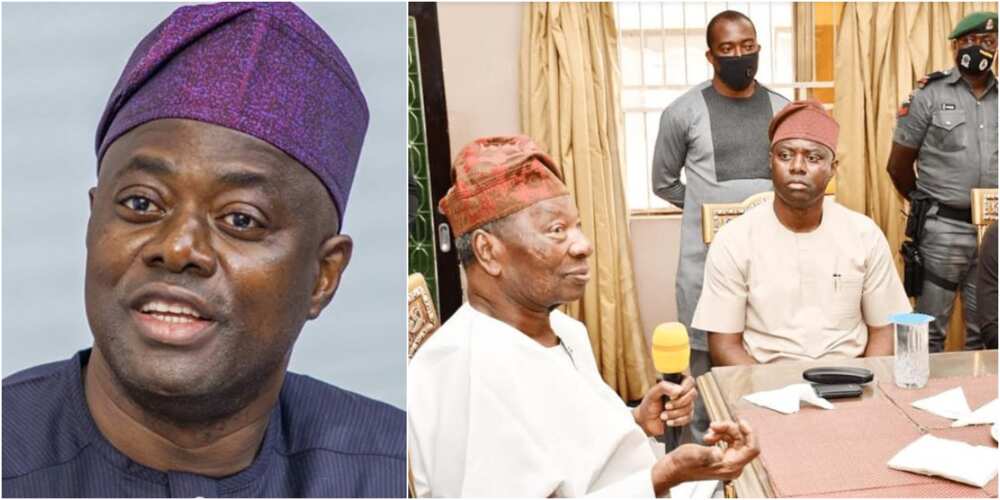 Oba Oladunni stated that some sons and daughters of the land have taken up the responsibility to repair and renovate the palace.

The king, however, urged Seyi Makinde to provide employment opportunities for youths who are idle and underemployed.

“Allow me to use this medium to express the appreciation of my people and myself for the kind gesture by Your Excellency in pledging the sum of One hundred million Naira (N100m) for the cost of the repairs and renovation of the palace from the damages of the attack and an immediate disbursement of the sum of Ten million Naira (N10m).

“However, subsequent to your visit, and in a gesture truly representative of the good and peace-loving people of Ogbomoso, a coordinated community of Ogbomoso sons and daughters have also taken up the responsibility for the repairs and renovation of their palace and the repair and renovation work has commenced.

“In consequence of this development, and the assessment done, there is no need to disburse the balance of the sum of Ninety million Naira (N90m).”

In other news, Bioreports earlier reported that Toke Makinwa reacted after a lady criticised her for wearing a designer outfit to the EndSARS protest.

The lady identified as Nneka stated that the media personality and her group of friends attended the protest to snap photos, show off designer outfits, make snaps with red cups, and then went back home.

Toke wasted no time in responding to Nneka’s tweet as she stated that God would punish her.

According to her, she doesn’t owe anybody anything but she noted that she resumed at the protest in the morning and walked from the toll gate to Onikan.

Man dies 3 hours after tweeting that Nigeria will not end him, girlfriend mourns online (photos)