Home hearsay Despite huge rejection by this school, man makes it in life, becomes doctor of law (photos)
hearsay

– After he was rejected entrance into the Ghana School of Law, he resolved to still become a lawyer

– Now, he is a full-fledged doctor of law and has shared his touching story with the rest of the world

Theophilus Edwin Coleman has shattered the glass ceiling of rejection and has passed out as a doctor of law after he was rejected by the Ghana School of Law.

A report sighted by . on myjoyonline.com, Coleman was among many students who failed to enter the School of Law after taking an entrance exam and attending an interview. 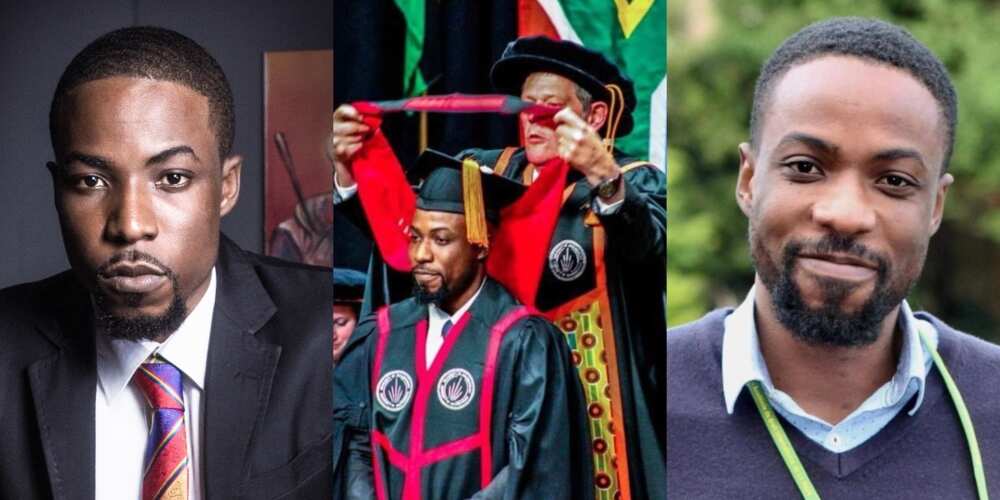 He is reported to have said:

“I completed UCC Law School in 2016 with a CGPA of 3.83. It came as a surprise that I failed the exam – and many of my classmates were also surprised. I don’t think I underestimated the exam, so I really don’t know what happened.”

He added that he even got the opportunity to prepare most of my classmates that made it to Makola so he was still at a loss as to why he did not pass.

Dr Coleman said he felt quite disappointed because he knew even though the outcome was not pleasant, he still could do very little to salvage the situation.

He added that the rejection came to him more as a disappointment rather than a painful experience.

Following the rejection, Dr Coleman turned his attention to pursuing a higher degree and got into the University of Johannesburg where he graduated with a first-class in International Commercial Law (LLM).

He then went a step further to pursue his LLD which focused on the theoretical foundations and the practical perspectives of the concept of contractual freedom and autonomy in Commonwealth Africa.

In furtherance of his LL D studies, Edwin was invited to serve as a Research Fellow at the Institute of European Law in Germany.

In 2018, he received an award from the Ghana National Students’ Awards Scheme as one of the Six Most Influential Student Personality in Ghana (home and abroad).

His LLD explored the degree to which commonwealth African countries ascribe respect to the notion of contractual liberty by taking into account the politico-economic orientations of governments, pronouncements by courts, constitutional underpinnings, and the impact of traditional African values such as Ubuntu on contract and commercial law jurisprudence in Commonwealth Africa.

The thesis also develops a matrix for assessing the degree of respect and commitment to contractual freedom and autonomy in Commonwealth Africa.

“My plan is to return to Ghana and fully enter into academia. For now however, I serving as a Postdoctoral Research Fellow at the Centre for International and Comparative Labour and Social Security Law at the University of Johannesburg.

“I do not see myself going to Ghana law school anytime soon. There are so many problems with legal education that has to be resolved. One of them is the lack of academics. The number of doctorate holders in law can be counted couldn’t even get to 60. The average currently is around 42. So there is a real problem….”

The journey has been tough but Dr. Coleman is simply glad and grateful.

Meanwhile, . earlier reported that Hallowed Olaoluwa, a 30-year-old Nigerian, is one of Africa’s youngest doctor of mathematics and a professor.

How I graduated with a 6.0 CGPA – University of Ibadan best Geology student | .

Art at its finest as barber draws stunning image of Cristiano Ronaldo with scissors; the hair is amazing (video)

Residents of Edo community rescue a baby who...

“Invest In Your Future Before You Invest In...

Nigerian dad chases his daughter out of the...

Inside details of the fraudulent deal Hushpuppi carried...

Nigerian guy and lady whose photos from the...

A sex-starved marriage is heading for destruction –...