Arsenal duo David Luiz and Willian are persuading their countryman Oscar to join them at the Emirates Stadium.

The Brazilian stars at some point represented the Blues before eventually parting ways with the Stamford Bridge outfit.

While Willian and Luiz joined the North London club, Oscar moved to the Chinese Super League and has been with Shanghai SIPG since 2017.

However, the 29-year-old has admitted that he hopes to return to Chelsea where he was crowned Premier League champion twice.

After making his £20 million from Internacional in 2012, Oscar scored 38 goals in 203 appearances during his five-year reign at the London club after which he moved to China for a whopping £60m.

The Brazilian has found the back of the net 39 times in 123 appearances – helping them win the league in 2018 before winning the Chinese FA Super Cup last year. 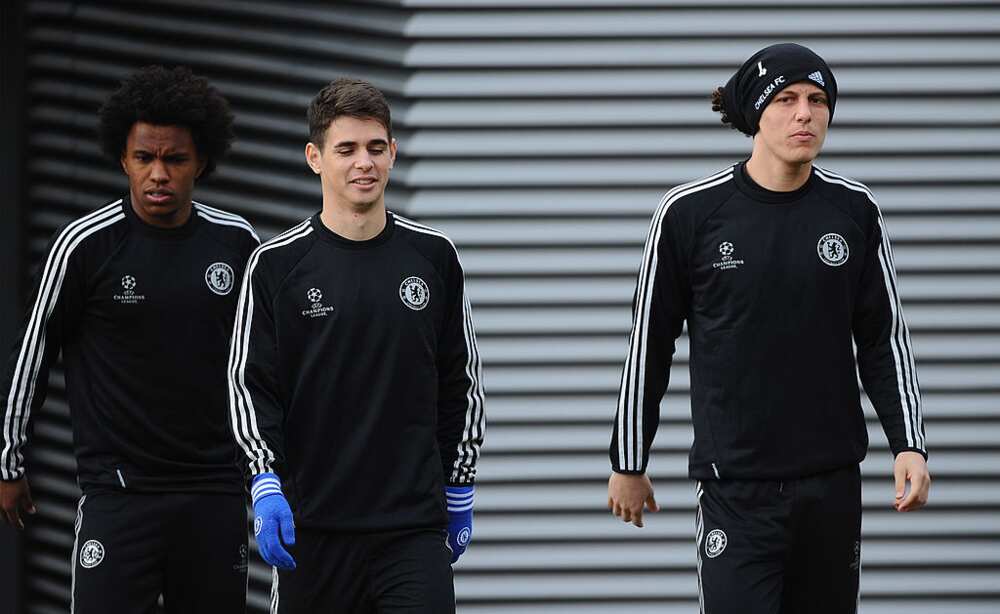 David Luiz, Willian, and Oscar during their reign at Chelsea but all three have parted ways with the Blues – Getty Images
Source: Getty Images

Oscar, who earns £400,000-a-week in wages has a deal with Shanghai SIPG until in 2024, and he has revealed that Luiz and Willian are desperate to have him play for Mikel Arteta.

Daily Mail reports that the Brazilian is not ready to terminate his lucrative deal in the Asian continent anytime soon – and will probably see out his contract with the club.

He added that his preferred destination would be Chelsea, with Inter Milan also of interest – despite boss Antonio Conte shipping him out of Stamford Bridge.

Oscar told Fox Sports Brasil: “They [Willian and Luiz] called me. We have good communication. “Sometimes I talk to them. They said ‘come to Arsenal, come here‘.

“Willian had finished the contract. I was happy that they got together again and happy that Willian is happy. “The most important thing is to be happy, regardless of the place. So I hope they are happy there.

“I really want to go back to Europe, [but] not now. At the moment I’m well here in China, I still have my contract here, which I hope to fulfil. “And I had approaches from some clubs to go back, but the situation is difficult for me to return.

“So I hope to fulfil my contract here calmly and then think about going back to Europe. “The first club I’d choose is Chelsea for sure, which is the club I built a very beautiful history with.

Bioreports earlier reported that Declan Rice switch to Chelsea has lingered on for a while now but the latest reports have it that Frank Lampard’s side would not mind offering defender Emerson as part of a swap deal to land their target.

The Blues are reportedly willing to tempt the Hammers to allow Rice to move to the Stamford Bridge and won’t mind Emerson going the opposite direction.

The Athletic are reporting that West Ham are desperate in keeping Rice who appears to be one of the most important players in their squad.