– A pretty teacher, Ferrier, generated a lot of reactions online after she posted a photo showing her with two nose rings

– There were many tweeps who showed her much love, saying everything about her is cool, touting as a figure of postmodern black teachers

A woman identified as Ferrier and with the Twitter handle @minobrino has caused a massive stir on social media after she posted her photo.

In a tweet on Thursday, January 14, the lady shared her first yearbook photo as a school teacher, saying that got her really emotional.

While most people praised her looks as cool, many tweeps said that her nose rings and ear piercings made her ‘professionally’ unfit for a teacher.

Ferrier gave those who tried to make a mockery of her competence apt responses, adding that she deserves everything she has attained.

In a subsequent tweet, the lady said that she provides assistance for core subjects in middle school for special kids.

See her photos below:

As at the time of writing this report, her tweet has over 150,000 likes with thousands of mixed reactions on her photo.

Below are some of the comments from people:

“Sooooo…. no one else is gon mention how this is Eartha Kitts doppelgänger?”

“Aww this is dopee. I wish my teachers had piercings.” 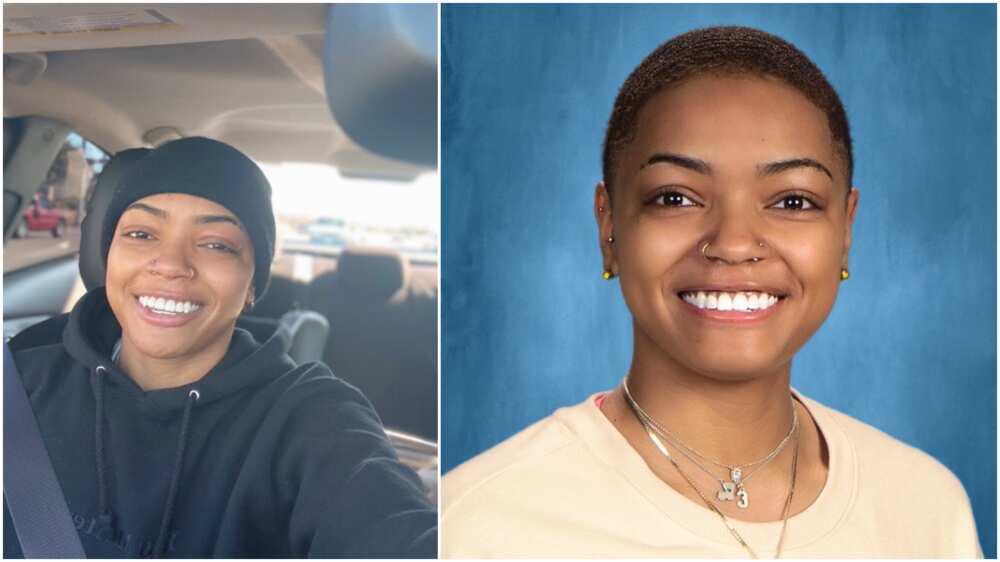 The woman said that how she looks does not define her competence.
Photo source: @minobrino
Source: Twitter

“Lmaoo this is hilarious to me because I had a teacher last year that was decked out in tattoos all over her arms, she had facial piercings and all and she had a buzz cut, one of the nicest women I’ve ever met.”

“Wait wait. You can still keep your facial piercings fr?”

“Yes! It may be a little more lenient with the masks; however.”

“I don’t know you, but I just had to comment and tell you that you have such a beautiful smile and your eyes shine with kindness and warmth.”

Meanwhile, Bioreports earlier reported that a Nigerian lady, Bellow Mariam, went on Twitter to celebrate her academic journey as she became a doctor.

In a post on the platform on Friday, January 8, the lady revealed that she took her oath and she is excited about it.

Many Nigerian men went to her comment section to confess their undying love for her as they applauded her feat.

COVID-19 survivor: ‘How I switched from a medical doctor to an investor’