– All things being equal, the Chinese government is working on making the train service by the second half of 2021

China unveiled a new technology in rail transportation with its prototype high-speed magnetic levitation bullet train. This is several steps ahead of the speed rail in Nigeria.

According to DesignBoom in 2019, the train can travel at a very high speed of 600km per hour and it was developed by China Railway Rolling Stock Corporation (CRRC).

The train is billed to start serving the public in 2021. It should be noted that magnetic levitation is a kind of technology in a train transport system where magnetic forces are deployed to make trains travel at a very great speed.

With the use of two magnetic forces, the train is pushed forward at a pace that makes it ‘float’. With some lack of friction between the train and the tracks, speed is boosted. 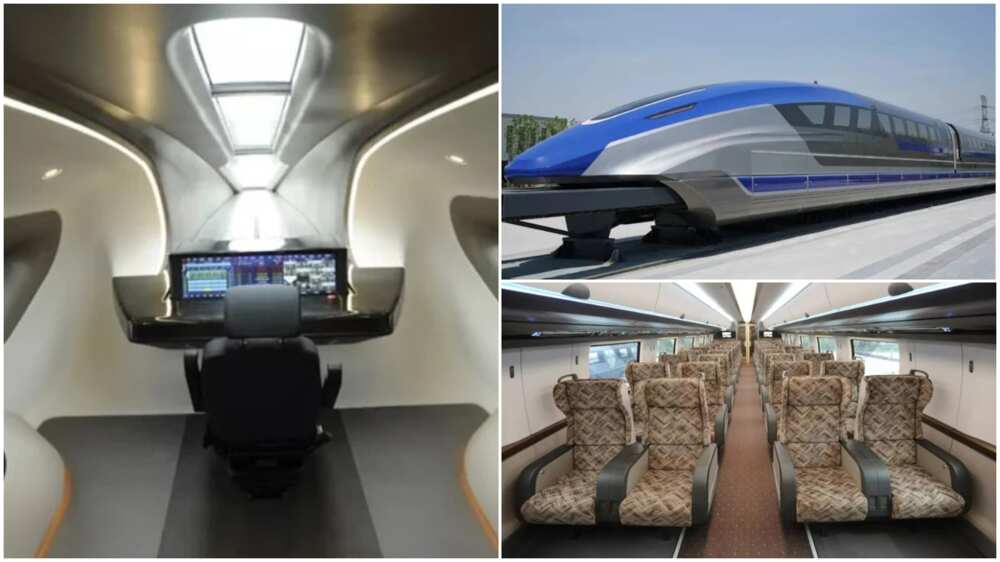 The plane is billed to begin service by June 2021.
Photo source: DesignBoom
.

It should be noted that the popular Beijing-Shanghai rail has a speed of 350km per hour, making the prototype the fastest in the country.

The CRRC’s deputy chief engineer, Ding Sansan, said the train speed can travel from Beijing to Shanghai in about 3.5 hours, beating an aeroplane’s speed of 4.5 hours.

The new train will actually go through great tests before it launches. A centre and a production building are currently being set up as the new service is expected to begin soon.

Meanwhile, Bioreports earlier reported that in a post on Tuesday, December 22, a man with the Twitter handle @dmIdavies gave a rider’s experience, a review that should tell anyone what to expect with the Lagos-Ibadan rail service.

According to him and the snapshot of his ticket, a ride from the Yaba station in Lagos to Moniya in Ibadan cost a sum of N2,500.

He said that the inside of the train is comfortable and very air-conditioned that one may ask for it to be reduced.

There are also charging points for those who may want to work on their PC before they get to their workplaces.

Nigerian man stranded in Europe since 2016 cries out for help, begs for repatriation in emotional video

Nigerian man stranded in Europe since 2016 cries out for help, begs for repatriation in emotional video