Children celebrate their mother as she finishes junior secondary school, this is her future ambition

– Madam Elizabeth Yamoah, the 57-year-old JHS graduate who wrote her BECE recently says she wants to become a nurse in the future

Madam Elizabeth Yamoah, the 57-year-old woman who wrote the Basic Education Certificate Examination (BECE) and graduated, has said she wants to become a professional nurse in the future.

Madam Yamoah, who completed the Agona Odoben Presbyterian Basic School is confident o coming out with flying colours in the examination, and hopes to enroll in a boarding school.

To this end, she is seeking help from the public so that as soon as her results come, she will not have to wait to enter the boarding school. 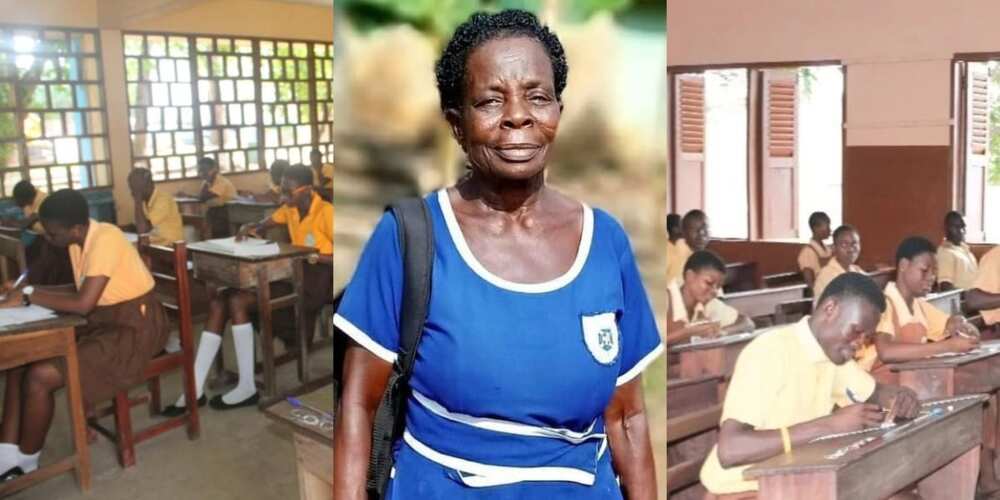 This is gathered in a report sighted by Bioreports on Kasapaonline.com, where it was reported that Madam Yamoah had an interview with Kasapa FM.

She also thanked President Akufo-Addo for introducing the Free SHS policy, and further appealed to him to make her an ambassador of free SHS so that should could speak with people about the need to be educated.

Nigerian Igbo man makes it in Canada, becomes a special scholar for this Queen Elizabeth program

Opening up a bit on her life, Madam Yamoah said she loved school as a child, however, she had to drop out in primary school due to some difficulties.

However, keen on not giving up on her dreams to become a nurse, she enrolled in school again and despite the insult, ridicules, and the negative comments that came her way, Madam Yamoah said she was bent on completing her BECE.

According to her, the community members did not help at all with their bad words for her, and she nearly gave up and dropped out at JHS2.

Meanwhile, her children have celebrated her success upon completing her BECE and have showered her with praises.

Perhaps, she is Ghana’s oldest BECE candidate, and we will follow up on her progress once results are released.

In other news, Jules Patrice Means, 67, had every reason to celebrate after she graduated with her undergraduate degree in sociology from the University of California in the United States.

In spite of her age and the voices that set out to detract her from pursuing her bachelor’s degree because many thought she was too old, she overcame the odds.

Man faces dangerous crocodile, tells it to get out, this was how the animal reacted (video)