– Cesc Fabregas has now hailed the impact of Hakim Ziyech and Timo Werner at Chelsea since their arrival, tipping them to help make the Blues “a powerful” force this season

– The two have been in fine form in recent weeks, helping the Blues win four matches on the bounce before the international break 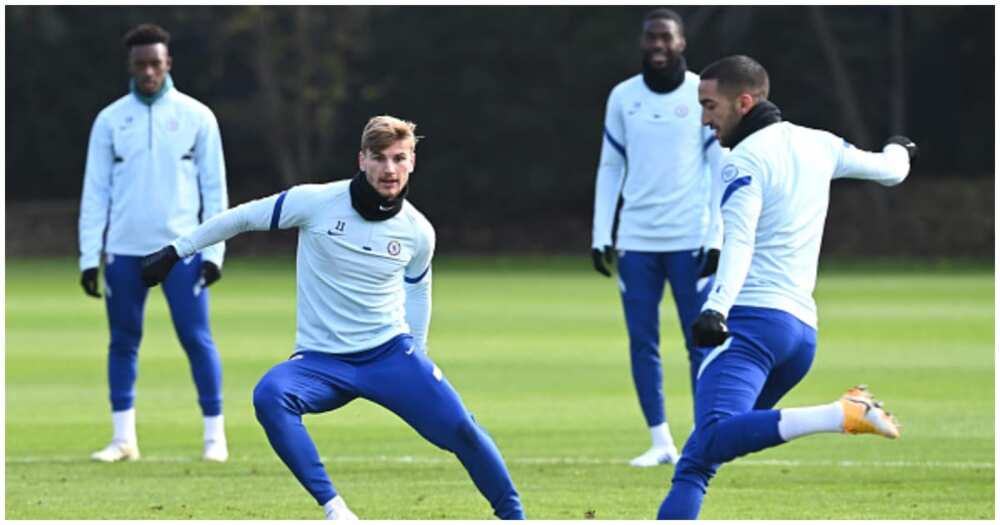 Cesc Fabregas has now hailed the impact of Hakim Ziyech and Timo Werner at Chelsea since their arrival. Photo by Darren Walsh
Source: Getty Images

The two stars have formed part of Frank Lampard’s new-look Chelsea following a summer spree that saw the club spend over £200million to recruit new players.

Fortunately for the two, they have hit the ground running, with Werner scoring seven goals in seven appearances so far this season.

Ziyech, on the other hand had a somewhat delayed start to the campaign following an injury sustained during a pre-season friendly clash.

However, he has been in fine form since his return from injury, playing an integral part in Chelsea’s fine run of results that saw them win four matches on the bounce before the international break.

The Moroccan recently became the first player since Diego Costa to net in his first two appearances for the west London side.

He also had a brace of assists as the Stamford Bridge dwellers whitewashed Sheffield United last weekend.

And when asked about the winger’s impact, Fabregas admitted the ex-Ajax star has been influential in Chelsea’s spectacular form.

The Spaniard underscored Ziyech’s good “vision” while on the pitch, adding it is what sets him apart from the rest.

“I think he’s (Ziyech) one of these players that makes things happen. Things that, when the defenders or the centre-backs don’t expect you to make that pass and you catch them sleeping,” Fabregas told 90min according to Metro UK.

“And you have someone like Timo Werner making great runs in behind and I think this is where Chelsea could be so powerful this year,” the ex-Arsenal midfielder added.

Chelsea are scheduled to take on Newcastle United on Saturday, November 21, at St. James Park Stadium.

The Blues currently occupy fifth place on the standings with 15 points from eight rounds of matches.

Earlier, Bioreports reported that Christian Pulisic who currently plays for Premier League side Chelsea has pulled out of the United States’ squad that will face Wales on Thursday, November 12, because of injury he sustained.

The 22-year-old was warming up for Chelsea’s Premier League game against Burnley before he sustained the injury was unable to play for the Stamford Bridge landlords.

According to reports, Christian Pulisic has been excused from the USA camp so as for him to return to Chelsea and continue his recuperation processes.

Greg Berhalter who is in charge of USA national senior men’s team explained that Christian Pulisic will be missed in his squad.

It's an avenue to destroy your fake union, Kemi Olunloyo says married couple shouldn't be on social media