Check out photos of upside-down cake this couple cut on their wedding day, many react

– Many social media users wonder what is holding the cake from falling off, saying they would like to have the same

– One of the shared pictures showed the owners of the cake, a lovely couple, cutting it to make their wedding ceremony

Cakes go a long way at weddings. No wonder they are always some of the important things couples settle before their marriage ceremony.

While creative bakers keep pushing the boundary in coming with designs, only a few could arguably match the one that recently surfaced online on Tuesday, September 29.

A Twitter user with the handle @athabrahamss shared photos of an upside-down hanging cake her mother baked.

She said she is obsessed with the beauty of the cake. In the pictures she shared, the piece could be seen being held by a slightly parabola decorated pole.

It is such a wonder to behold. The first thought that comes to one’s mind is how could the cake is not falling off and what exactly could be holding its fragile structure in place.

In response to people asking how the wedding cake was cut at the wedding ceremony, @athabrahamas shared another photo showing a couple with a knife slicing through it. 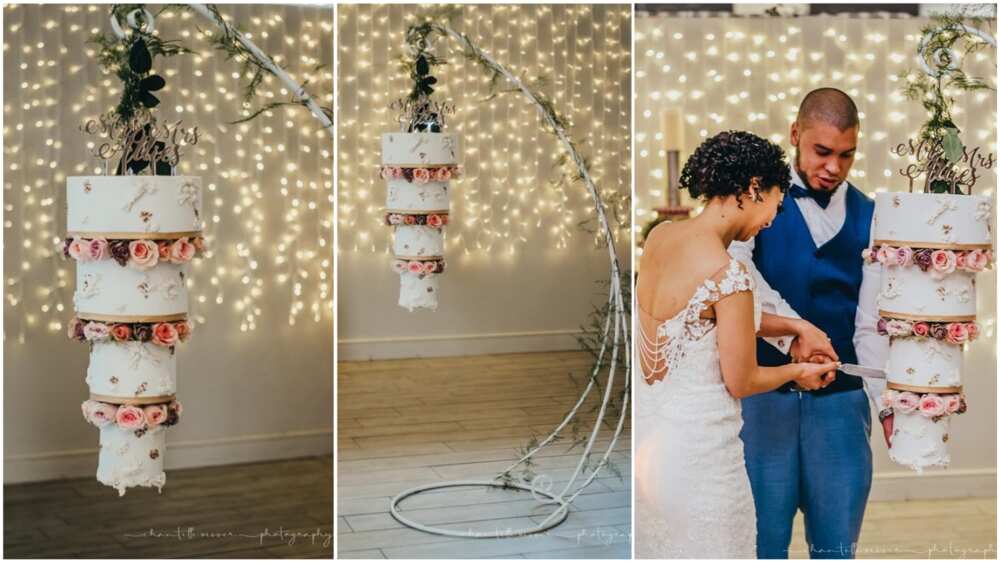 The tweet has generated so many reactions online with many praising the effort that went into the baking. Below are some of them:

Wow this is beautiful… But is the groom supporting it with his hand??!! Or it’s just me

So beautiful! But my mother, “upside down cake? So your marriage would be upside down? From large to small?” You won’t hear the end of it

It’s beautiful but this cake is stressing me out. It’s anxiety Kyotonite. I’d be starring at it all night waiting for it to fall

Just scrolled through her Instagram and noticed she is the same lady that did my friends wedding cake earlier this year, her work is stunning. I’m definitely getting her numbers from Nono

As a child then, he said that the girl thought he knew how to peel oranges with a touch of creativity.

His perceived skill drew her in and they became friends. Years after on Thursday, September 10, they got married in the US.

Osagie Otabor, Akure About 10 persons have been killed in an accident that happened on Saturday evening at Akungba market,...

How Nigerian troops aided the rescue of American hostage – Military