– The midfielder has played an integral part in United’s title charge this season that has the club sitting second, just a point behind Man City

– However, it has now emerged Fernandes puts in lots of hard-work and has to remain behind after training for extra sessions

Bruno Fernandes has revealed he has a pool of four Man United teammates who stay behind with him for more training after sessions with the rest of the team. 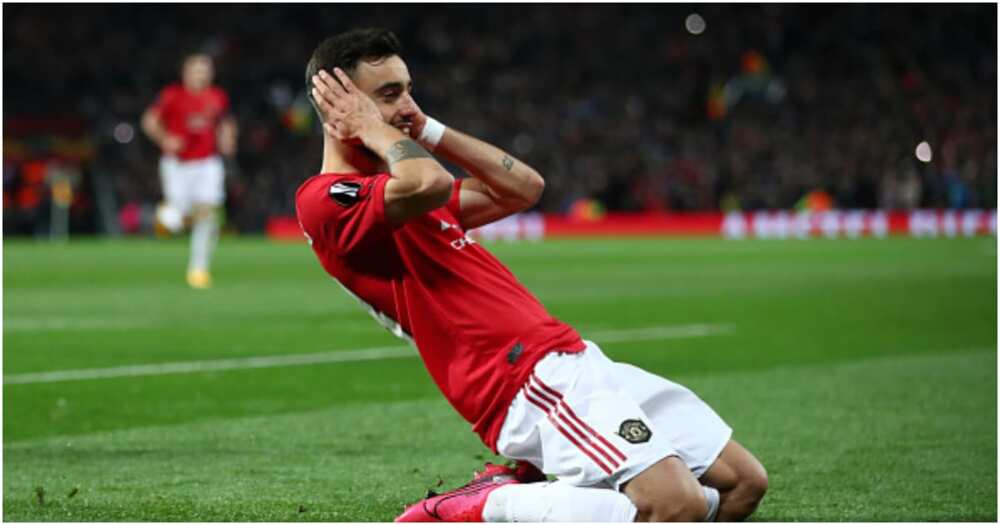 Bruno Fernandes has established himself as one of Solskjaer’s most important squad member since his January arrival from Sporting. Photo by Clive Brunskill.
Source: Getty Images

Fernandes has built a reputation for him at United a year after he joined the club, forming part of Ole Gunnar Solskjaer’s squad of key players.

Last season, he found the back of the net eight times in the Premier League to help the Red Devils book a place in the Champions League.

The 2020/21 campaign has seen him pick from where he left, playing a pivotal part in United’s fine run of results.

However, it has now emerged the Portuguese playmaker puts a lot of hard work and dedication, especially in training to hit top form.

It is understood the former Sporting Lisbon star often stays back for more training way after the rest of the squad has left Carrington training complex.

So infectious his mentality is that other teammates have begun putting in the extra work with him.

Speaking on the culture, the 26-year-old named Marcus Rashford and summer signing Alex Telles among the players who stick with him.

“Sometimes he [Ole Gunnar Solskjaer] has to kick me out of the training to stop,” he told MUTV as cited by Mirror UK.

“I think in training we stay there most of the time – me and Juan stay longer, but also Alex [Telles], Rashy [Marcus Rashford], Fred also stays with us.”

He also revealed Juan Mata and Brazilian midfielder Fred are the other players who engage in personal training sessions with him.

United are scheduled to take on relegation-bound Sheffield on Wednesday night, January 27, in a match they will be keen to use to return to the summit of the Premier League.

Man City currently top the standings with 41 points, one ahead of the Red Devils after their 5-0 win over struggling West Bromwich Albion at The Hawthorns.

Meanwhile, Bioreports had earlier reported that Manchester United midfielder Paul Pogba has urged his teammates to “stay arrogant” if they are to keep their place at the top of the Premier League.

Pogba has been instrumental for United in the last few games as he continues his resurgence under Ole Gunnar Solskjaer.

His latest strike with his weaker foot helped United maintain momentum at the top of the table against a spirited Fulham side.