Breaking: Pastor Adeboye calls for release of Leah Sharibu, says “we shall not relent”

– Sharibu was kidnapped by Boko Haram terrorists in 2018 in Dapchi, and she has not been released after refusing to renounce her faith

Enoch Adejare Adeboye, founder and the general overseer of the Redeem Christians Church of God (RCCG), has called for the release of Leah Sharibu.

Sharibu, a Christian schoolgirl aged 14 years at the time of her capture, is the only remaining Dapchi schoolgirl still held hostage after the Boko Haram terrorists’ invasion of Dapchi girls college in Yobe state in 2018.

She was reported to have refused to renounce her faith when her abductors tried to forcibly convert her to Islam. 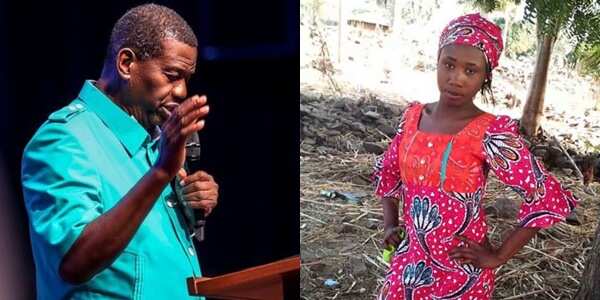 In a press release on Friday, February 19, the popular Christian cleric said the churches will not relent in their effort to seek the release of Sharibu.

Adeboye’s calls for Sharibu’s release came barely 48 hours after students were kidnapped at the Government Science College in Kagara, Niger state. Efforts are ongoing to rescue them.

“I, hereby again call and direct all pastors in the Redeemed Christian Church of God, all over the world, not to stop but to intensify their prayers for the release of Leah Sharibu.

I also call on every parent, all over the world, to use whatever influence they have, to ensure that Leah Sharibu, as well as other children in captivity are released. We shall not relent in our prayers.”

Meanwhile, Aisha Babangida, daughter of the former military head of state and prominent statesman Ibrahim Babangida, has urged the federal government to “reevaluate the root causes of kidnapping and address them”

Reacting to the abduction of college students in Kagara by suspected bandits in a post on her Instagram page on Thursday, February 18, Babangida said she shared the pain of the victims.

She prayed that the students be found and returned home “quickly and safely”, saying she also “felt abducted” by the news which has plunged Niger state into a palpable panic.

Troost-Ekong scores own goal in Watford victory over Derby County

Troost-Ekong scores own goal in Watford victory over Derby County