– Popular Nigerian cross dresser, Bobrisky, has showed love to yet another fan who got a tattoo to honour him

– The fan, Ewatomigold had claimed that she was assaulted on the road after people recognised her as being the lady who got a tattoo of the socialite

– Bob shared a video of his meeting with the fan as he gifted her some money, promised her a new phone and a Dubai trip

Nigerian cross dresser, Bobrisky, is once again in the news for showing love to his die-hard fans.

The socialite recently celebrated some of his fans after they got tattoos to celebrate him. The third fan to toe the same line, Ewatomigold, finally received her own reward.

The young lady had inked Bobrisky’s picture on her back and she shared the video on social media. After the video went viral, the cross dresser thanked her for showing love and that was where it ended. 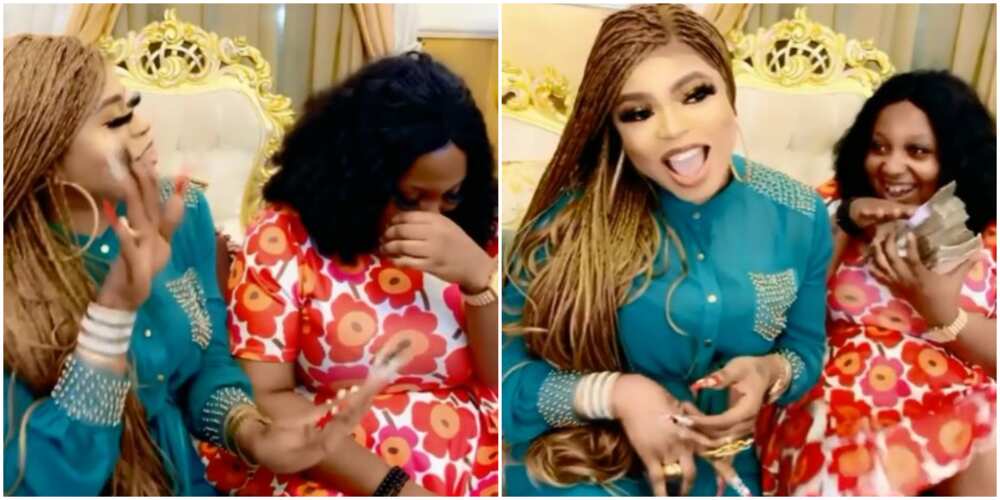 Bobrisky finally met with the fan who was allegedly assaulted for getting a tattoo of him, gifts her some money.
Photos: @bobrisky222
Source: Instagram

Well, it appears Bobrisky has now decided to compensate her for her troubles especially after claims that she was assaulted for getting the tattoo.

The lady took to social media to lament about how some people in Ikorodu area of Lagos recognise her for getting a tattoo of Bob then proceeded to rough-handling her.

Well, Bob has now rewarded her after what she went through. He gifted her some money, promised to buy her a phone and to also take her to Dubai.

In other similar news, Bioreports had earlier reported on five Nigerian celebrities that fans have honoured with tattoos and how they were rewarded.

A number of Nigerian celebs have been fortunate to have die-hard fans who would do anything to express their love for them.