A copy of the Holy Bible in a Kente shop at Odawna Market survived the massive fire outbreak that hit the shops to the amazement of all eye-witnesses.

This was brought out in an interview YEN.com.gh’s Philip Abutiate had with one of the eye-witnesses who discovered the Bible.

According to the gentleman whose name was not disclosed, the Bible laid right by a table.

Watch the full narration below:

The witness further indicated that the fire burnt everything in the shop including all the Kente cloths and the table but the Bible just beside them was not even touched by the fire.

When asked by Philip what he had to say regarding the observation, the man said:

“What happened at the Odawna Market was a massive disaster but the Bible was able to survive which proves the power in the word of God and the fact that it needs to be regarded with all seriousness.” 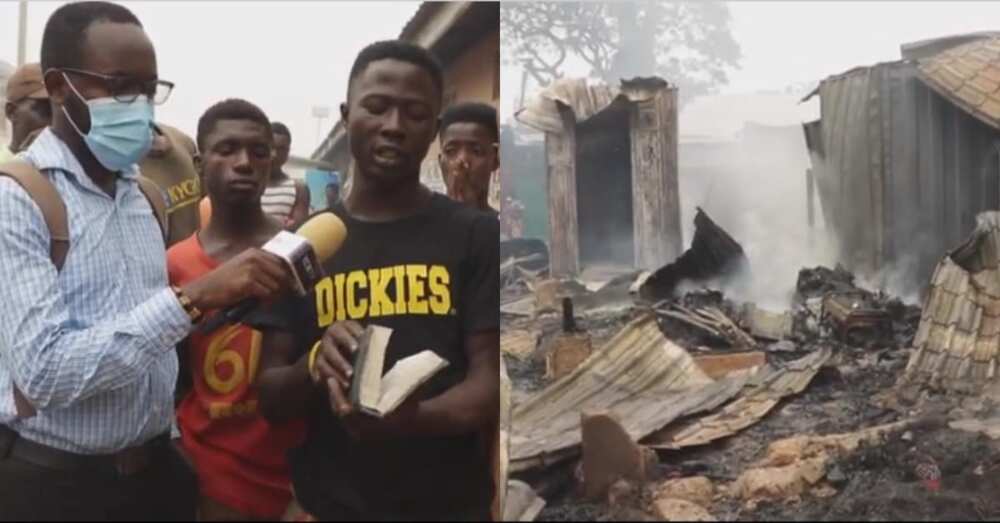 Bible found unharmed in shop that was burnt down completely at Odawna Market
Source: YEN.com.gh
.

Meanwhile, Bioreports previously reported that a Nigerian traditionalist did a Bible giveaway for her friends and followers on Instagram.

Identified as Adaeze Gift Okolie, she explained that the Bible used to be hers when she was still practising Christianity.

Okolie who also goes by the name Adaeze Ijemmili stated that she no longer believes in the ‘lie’.

Adaeze, who described herself as a river goddess and an antichrist, revealed that she thought of burning the holy book but didn’t out of respect for people who still believe in it.

Be honest, can you give up your religion for $5m? | Bioreports