– While congratulations have continued to pour in for new WTO boss Dr Ngozi Okonjo-Iweala, Nigerians have taken to social media to start up a challenge in her honour

History was made on Monday, February 15 as Nigeria’s former Finance minister, Dr Ngozi Okonjo-Iweala, was confirmed as the new head of the World Trade Organization.

In celebration of her record-breaking feat and achievement as the first African and female to assume such a high role, Nigerians started the #BeLikeNgoziChallenge and a particular lady stole the show. 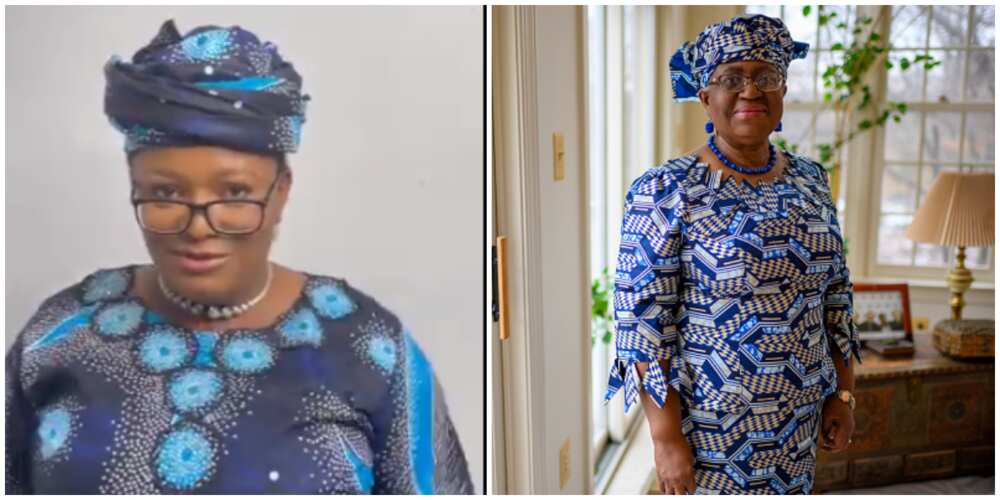 In the challenge that is currently trending on Twitter and involves ladies rocking NOI’s signatory head scarf with a matching outfit and a spectacle, a yet-to-be-identified lady stunned social media as she had an almost striking resemblance with Ngozi.

While many hoped the lady @honilatte could articulate on economic matters like Ngozi, others hailed her almost striking look like the economic maverick.

Bioreports have compiled some reactions that trailed her photo:

“Hope ur brain be like Mama’s own. Not pictures.”

“Now this is a challenge every Nigerian woman shld take part in. Women like NOI are rare. She is an inspiration to black women and MEN.”

While some people appreciated how really beautiful she is, others came under her photos to criticise the comparison, saying a woman of ‘virtue’ should not be comparing herself with someone who is ‘wayward’.

There were others who said she looks more beautiful than the Pills and Portion crooner. Her post has gathered thousands of reactions from people.