– There were others who praised the hairstyle, saying low cut always complements ladies’ facial appearances

A Nigerian lady showed off her beautiful haircut on Twitter, a look which contradicts her known profile photo and people have been talking about it.

In a post on the platform on Tuesday, November 24, the lady shared photos of her new haircut with perfect ‘friction’ lines.

Her photos received mixed reactions from people as some wondered why she had to go on a low cut.

As at the time of writing this report, her post has got hundreds of reactions with over 6,000 likes that show massive engagements. 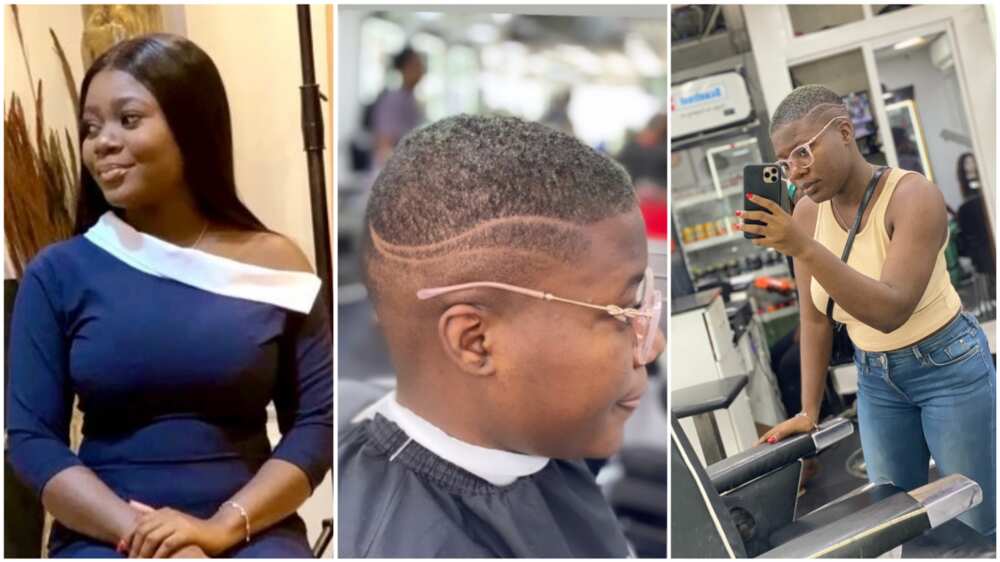 The Nigerian lady publicly posted how she looks with a lowcut on Twitter.
Photo source: @Faliatt
Source: Twitter

“Mama saw new good in you she called for daughter back.”

“Nothing wey person no go see for this app. Falilat the fine boy.”

“This babe has been vibing a whole lot these past weeks and I likeee it, especially that voicenote stuff.”

“Falilat… You dey burst my brain, my eye glass is broken before.”

Meanwhile, Bioreports earlier reported that a popular Nigerian barber, Adeyinka, who first became popular when he shared his amazing work on Twitter showing the perfect haircut he gave a client got media attention again.

This time around, the man carved the face of a popular musician, Wizkid, on a man’s head. With his artistic finesse, he placed the singer’s face on the left side of the fan’s head. People have praised his skill since photos of his work surfaced on both Instagram and Twitter.

In similar news, another barber, Onu Okwuchukwu Charles, became famous for his great work. Okwuchwu said he started the profession after he could not further his education due to lack of money.

The young Nigerian said he has been practising the craft since 2015. He added that he loves the way haircutting transforms one’s looks.