– BB.’s Ifu Ennada is currently single and from indications also searching for a boo

– According to the BB. star, she won’t be dating any Nigerian man again

Former Big Brother . (BB.) housemate Ifu Ennada has been single for a while and it appears the pretty lady is determined to still try her luck just before the year comes to an end.

Just recently, the BB. star took to her page on Instastory with a post about how she was crushing over her tutor for an online programme.

The young lady noted that the tutor is a Caucasian in his early 30s who lives in California and also has a beard just like she loves.

Ifu Ennada teasingly noted that she has a US visa and wondered if the Lord is telling her to quit being single.

“May God forgive me. I’m supposed to be listening to lectures online with my tutor and session mates, but I’m here typing this story to tell you all that I’m crushing on my tutor.

In a different slide, the reality star noted that the tutor is a good listener and also good with his job.

She went on to add that if she ever decides to date again, it won’t be with Nigerian men. 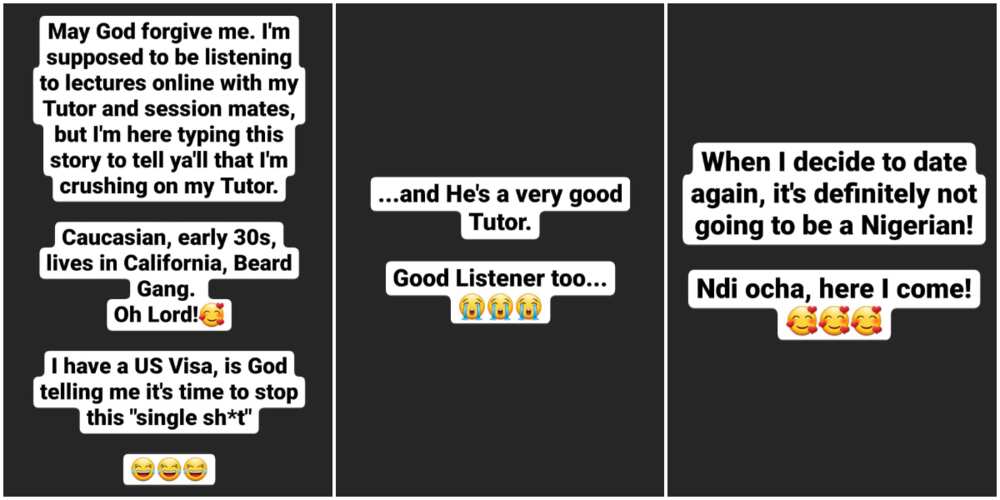 Recall that some weeks ago . reported that the reality star took to social media talking about her relationship ordeals and how she may be cursed when it comes to dating men.

The former BB. housemate revealed that she has always been the one spending in most of the relationships she has found herself in.

“Writing this, I’m just thinking of all the men I’ve been involved with in the past. There’s none of them I didn’t add value to, even the one with an influential father- the idiot knows himself. “Maybe I’m like Paul who isn’t destined to be married.”

What Do Women Really Want From Men? Nigerians Speak | .

I am raising a son your daughter will...

Have we been thinking about ‘sex drive’ all...

The Morning After: Lucasfilm hired a YouTuber with...

Sarah Ferguson Says Princess Diana “Would Be So...

Raj Kundra case update: Actress who was a...

BBNaija S6: Why I’m in an open relationship...