– After keeping the notes, the baby ensured they were intact by tapping her dress as a way to feel for them

A video of a little baby has shown that kids pick things easily from events that happen around them.

In the clip, the girl picked some money from a wallet after playing with it for seconds. Where she stored the money for safe-keeping amazed many.

The baby, perhaps mimicking what someone close to her always does, put the money under her dress.

A female Twitter user, @PeaceVictoria1, said what the baby did was in the DNA of all ladies. Many people seemed to agree with her in the comment section.

The video has close to 45,000 likes with 16,000 retweets as at the time of writing this report. Bioreports compiled some of the reactions below:

“Now I’m getting to know this gender just loves money for no reason, sometimes they don’t even need it.”

“She learnt it from someone in dat house… mummy come outside.” 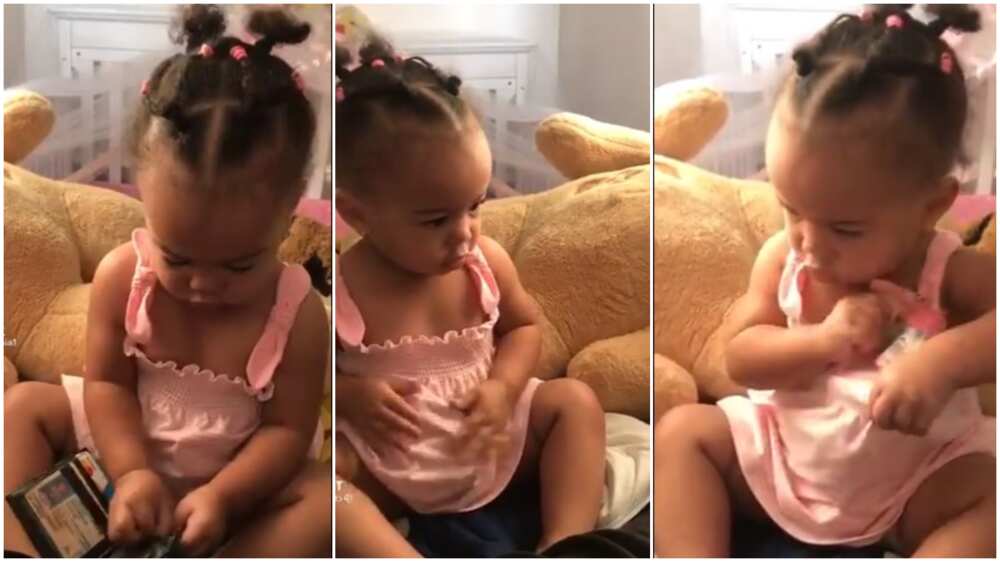 “Did anyone notice there was already hidden money in her gown from the start of the video, she then proceeded to add the last two. Omo my unborn child are you seeing your mates.”

“I wasn’t gonna say anything, until she started to put all the money in her clothings. Took me by surprise. Chai God!!!”

“And somebody will be calling this ancestor baby? This is somebody’s grandmother looking young and cute.”

Meanwhile, Bioreports earlier reported that a lady with the Twitter handle @__ivybaby shared a very cute photo of a baby trying to clean tears off a cartoon character’s face.

In the photo, the baby who holds what looks like a tissue placed it on the TV screen as the character from My Little Pony wept.

Many tweeps said that the photo almost made them cry with the way the kid tried to make the cartoon character feel better.

Joseph Omotayo writes for the human interest desk at Bioreports. He graduated from Obafemi Awolowo University with a degree in Literature in English. He loves basketball and books.