– In a short clip, the kid delicately built a ‘mountain’ of boxes as he placed over each other

– Overjoyed by his achievement, the baby screams in happiness as he laughed hard

A baby has expressed undiluted joy at completing a task in some game of boxes. In a video that has gone viral, the kid placed cube-like boxes on each other while ensuring none fell.

After every successful placement, the baby would move a bit away from to assess what he has just done.

At a time when it seemed the whole pyramid of he has built up would come crashing down, the baby went ahead, stretched on his toes, and got another box up. 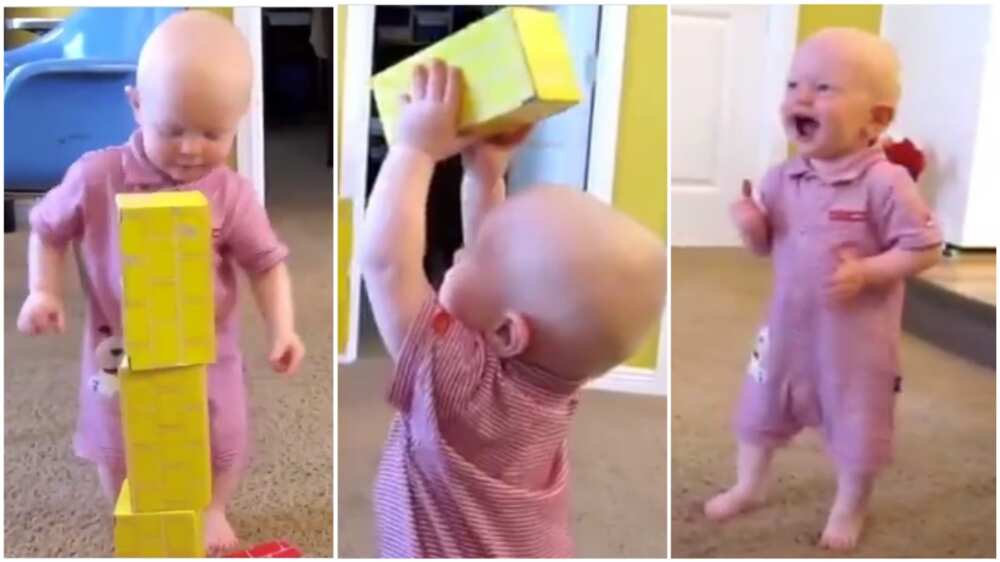 The baby expressed great joy as he placed the boxes on each other.
Photo source: Twitter/@cctv_idiot
Source: Twitter

Adorable moments in the video are places when the baby laughed hard as his parents behind the camera encouraged him.

The joy he oozed at every instance of completion is an infective one.

“What a good control of muscle for a baby… Its awesome…”

“What a funny and sweet way to start the day.”

“That is so amazing that that child did that!”

“Wooooohoooooo I have never seen such excitement”

Meanwhile, Bioreports earlier reported that as businesses around the world are adapting to the new normal of asking their staff to permanently work from home, a baby went viral for mimicking carrying out duties from his comfort zone.

The baby, with his hands on the keyboard, typed away as he scratched at the buttons while intermittently pointing at the screen.

His dad watching what his kid was doing kept laughing as he lay on a chair nearby. What seemed very funny was when the baby quickly rushed to a book beside the Macbook as if he was trying to get details of what to type.

By Sanni Onogu, Abuja Five states — Rivers, Bayelsa, Cross River, Osun and Ondo – are to get a refund...

Fashola to APC: respect your zoning plan in 2023