– Gabon had defeated the Gambia by 2-0 as the reverse fixture is slated for Monday, November 16, 2020

Pierre-Emerick Aubameyang has taken the positive side of their unpleasant welcome at the airport ahead of their AFCON 2022 qualifier against the Gambia.

The Gabonese team had defeated their opponents by 2-0 a few days earlier with Aubameyang among the scorers.

But as the Arsenal captain and the rest of the team arrived at the Banjul International Airport on Sunday, November 15, they experienced a delay. 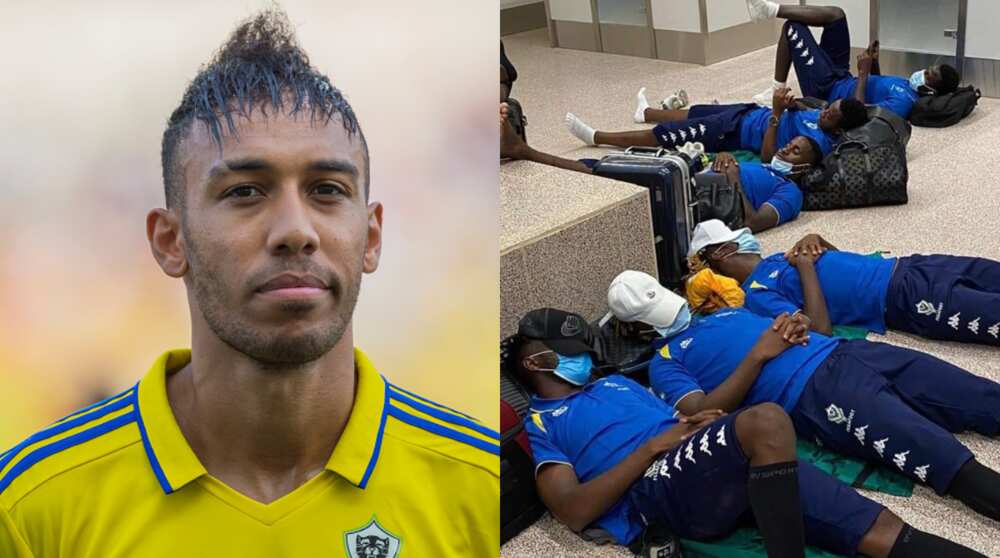 It is understood that their passports were seized despite providing their coronavirus results to the immigration officers for checks.

The Panthers were still left stranded at the airport up until 4 am the next day which resulted in players and some coaching crew members sleep on the floor.

The team were finally released after Aubameyang shared pictures of the scene at the airport on his social media handle.

“This will not demotivate us but people need to know and especially that Caf takes these responsibilities. In 2020, we want Africa to grow and this is not how we’re going to get there!!”

Gabon are set to make a return to the biggest soccer fiesta in Africa after missing out during the last edition in Egypt in 2019.

The Panthers are in firm control in Group D, winning two of their three matches and playing a draw against the Democratic Republic of Congo (DRC).

Meanwhile, Bioreports had earlier reported that John Ogu has expressed exceptional affection for young boys on the streets of Lagos after he received special hailing due to his status as a Super Eagles’ player.

The midfielder who is currently a free agent having left Saudi Arabian club Al-Adalah in September was not invited for the doubleheader against Sierra Leone.

He is said to be at home in Lagos and in a clip he posted on his Twitter handle, Ogu was seen in his car with boys attempting to talk-him to part away with some money.

Just in: See what Lagos 'Twale' boys did to Super Eagles star when they saw him in his expensive car (video)

By Robert Egbe The Federal High Court in Lagos on Friday authorised a former governor of Ekiti State, Ayodele Fayose,...

INEC begins distribution of materials ahead of Lagos East Election