10 seconds ago by
Tunde Ososanya

– A Nigerian man living in Germany, John Emeka Akude, has made history by becoming the first councillor of African origin in Cologne

– Akude was recently elected member of Cologne City Council in the city, which is Germany’s 4th largest city

– Another politician of African origin who participated in the election, Rahab Njeri, says Akude’s victory is a victory for all Africans in Cologne

A Nigerian man identified as John Emeka Akude has made the country proud by making history after being elected member of the Cologne City Council (Stadtrat) in Germany.

Another politician of African origin who participated in the election, Rahab Njeri, expressed satisfaction over Akude’s victory.

Njeri said though she was not elected but all Africans living in the city were winners with Akude’s victory. 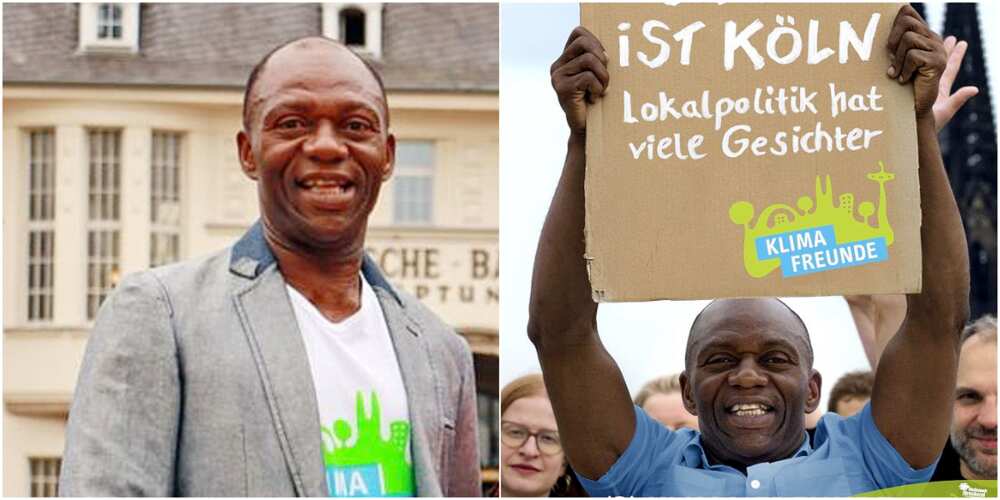 Akude and Njeri contested on the platform of Klima Freunde (Friends of the Climate).

In other news, a Canadian-based Nigerian man identified as Kelechi Madu has been appointed minister of justice and solicitor general of the Province of Alberta in Canada.

Madu took to his LinkedIn page to reflect on his new appointment and vowed to ensure that everyone in Alberta has access to equal justice.

He said his legal work has always been informed by the fundamental belief that everyone deserves equal access to justice, adding that this will never change.

Madu said he cherishes the Canadian Charter of Rights and Freedoms, which says: “Every individual is equal before and under the law and has the right to the equal protection and equal benefit of the law without discrimination.”

He assured that those words in the charter would flourish in the lives of Albertans and inspire confidence.

Madu added: “I look forward to working on many critical democratic reforms, including recall legislation and important citizenship initiative referendums, and taking the lead role on the implementation of our government’s fight for a fair deal within confederation.”

10 Empowering Moments That Set a New Standard for Fashion Week

10 Empowering Moments That Set a New Standard for Fashion Week

Civil societies fault INEC on failure to curb vote-buying, others

By Eric Ikhilae, Abuja The Independent National Electoral Commission (INEC) has got thumps-down for its inability to curb vote buying...

Obasanjo to Obaseki: be magnanimous in victory