– In the post shared, the school posted a list of dress codes that have been banned from the school

– Many social media users have since reacted

In a bid to clamp down on indecent dressing, a Federal Polytechnic in Anambra state has caused quite a buzz on social media with their method of fighting indecency at the school.

Twitter user, ZSA shared a snapshot of the notice put up by the school which listed the type of dressing that has been banned from the school. 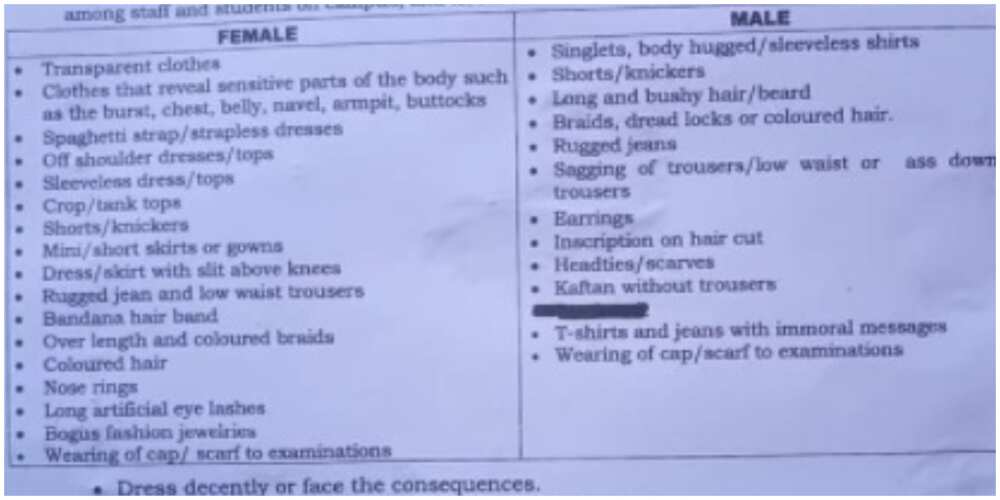 For the guys, dreadlocks, jeans and t-shirts with ‘immoral messages’, ripped jeans and shorts among other things have prohibited.

“Dress decently and God will love you more. Indecent dressing reduces a queen/king to a slave.”

“Someone shared this with me on Facebook. Apparently, this is the dress code issued by a Federal Polytechnic in Anambra state. How ridiculous is this? Institutions subjugating citizens and subjects. Does it not end?”

Many Nigerians have expressed outrage over the set of rules which they don’t agree with.

Read some comments from @famousblogng’s page:

“What has coloured hair got to do with getting educated. This is an infringement of fundamental human right to express yourself. Next they will start saying don’t have right to life, anyway, the govt have that covered with their incessant killing.”

“They are mad! You see this is what we are talking about. Which one is ” dress decently and God will love you more” what rubbish! Thank God I don finish school since!”

“It’s the Lengthy and coloured braids that Off me, Be like say na Deeper life member be their VC… Heaven is not by force nahhh.”

“It’s the school’s laws. Obey or go to another school. Why is this so hard to understand. Na you build the school? Work places that have dress code nko?”

“Weytin concern them with the hair style or bandana or eye lashes?”

“How does dressing affect education, like I don’t still get it.”

In other news, On October 25, photos surfaced online showing a man wearing a dress made from denim material. The images were posted on Twitter by social media user, @emily_teffoM.

The MixtapE! Presents the Only Halloween Playlist You Need

The MixtapE! Presents the Only Halloween Playlist You Need