– The Akeredolu-Agboola drama that rocked Ondo in 2020 is said to be playing out in Oyo between the deputy governor, Rauf Olaniyan, and Governor Seyi Makinde

– However, the deputy governor has debunked the claims, arguing that there is no rift whatsoever between him and his boss

There are claims that the ambition of becoming a governor come 2023 general elections is causing a wide rift between the deputy governor of Oyo, Rauf Olaniyan, and his boss, Seyi Makinde.

In fact, some Peoples Democratic Party (PDP) chieftains in the state have allegedly speculated that the deputy governor may defect from the party, so as to get better chances of occupying his boss’ seat, a situation which is quite reminiscent of the Akeredolu-Agboola drama in Ondo before the 2020 gubernatorial poll.

Added to this, while the governor, sources claim, is bent on delivering on his campaign promises, Olaniyan has complained of not being carried along, The Nation reports. 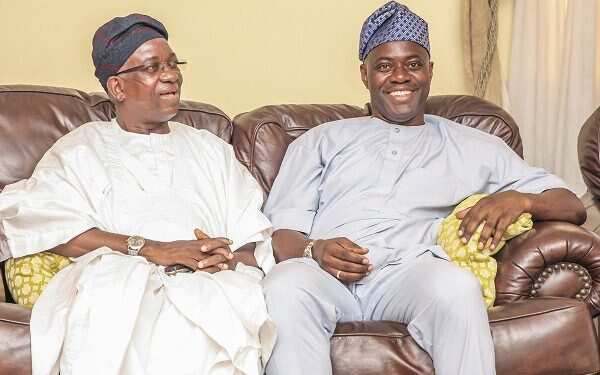 The rift between Makinde and his deputy, Olaniyan, is tearing the state apart
(Photo: @seyiamakinde)
Source: Twitter

Before now, persons loyal to Olaniyan had accused Makinde of not handing over power to his deputy when he was in isolation after contracting COVID-19 in 2020.

Reacting to the allegations, Makinde on Wednesday, January 13, denied and dismissed these allegations, stating that the deputy has his specific duties assigned to him constitutionally.

However, Olaniyan himself has come out to say that he has no issue to settle with Makinde, denying reports that there is a rift between them.

He categorically noted that even if there is any misunderstanding between him and the governor, there was always room for a peaceful resolution as a true Muslim.

Meanwhile, Makinde appeared to be facing some battles within and outside his state.

The governor was facing the twin problem of not being on good terms with Olaniyan and having to cope with the crisis that is currently rocking the southwest PDP.

Do you think Tinubu can become Nigeria’s next president | Bioreports