– According to him, the former minister is a dogged fighter who will have nothing to gain in the APC

Following days of speculations, Ayodele Fayose, has come out to claim that the former aviation minister, Chief Olufemi Fani-Kayode, is not leaving the opposition Peoples Democratic Party (PDP).

According to him, Fani-Kayode is a dogged fighter, who will gain nothing by joining the ruling APC, bioreports reports.

Fayose said instead of joining the APC, he would rather go and be a doting husband. 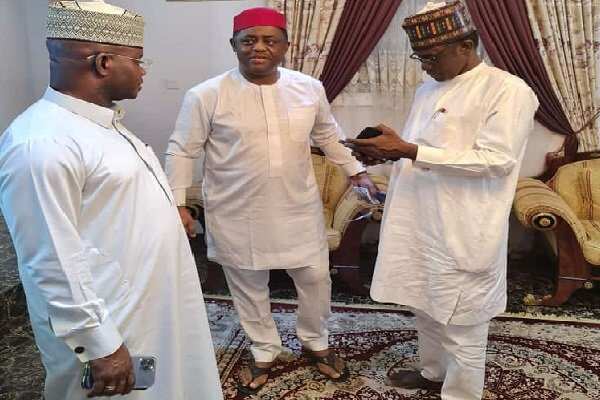 “I am 100 per cent sure FFK is going nowhere. I have spoken to FFK and I am sure he is not going. If he goes to APC, he would be dead politically as a frontline Nigerian.

“Although he is not a day-to-day politician, he is dogged and he is a fighter. I have asked him and he said it is far from it.”

Recall that Bioreports had reported that Salihu Lukman, the director-general of the Progressive Governors’ Forum (PGF), said the defection of Fani-Kayode to the APC was stalled due to the strong internal democratic culture of the party.

Lukman, who spoke on Friday, February 12, in a statement obtained by Bioreports, said Fani-Kayode “was not welcome to join APC because he doesn’t have the values required to be a member.”

According to the PGF DG, the former aviation minister tried to manipulate some leaders of the APC but it was botched based on the ground of moral ethics and values.

Bioreports had also reported that the Rivers state chapter of the PDP reacted to FFk’s meeting with some leaders of the ruling APC.

Tambari said Fani-Kayode enjoys the freedom of association, hence the reason his defection cannot come as a surprise.