– The Alaafin of Oyo, Oba Lamidi Adeyemi III, is celebrating his 50th anniversary as a king

– His youngest wife, Queen Dami, also took to social media to praise and eulogise her husband

The Alaafin of Oyo, Oba Lamidi Olayiwola Adeyemi III, is celebrating his 50th year on the throne of his forefathers today, January 14.

The monarch stated in a post on Instagram that ascending the throne was a dream come true for him and noted that God and posterity have been favourable to Oyo since he became king. 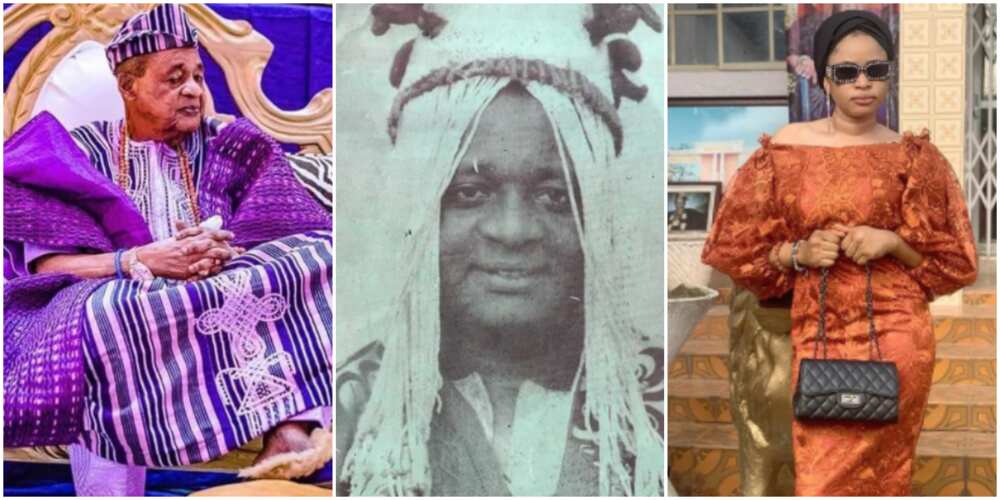 Noting how hard it was to get to the point Oyo is at today, Oba Lamidi thanked his people on behalf of himself and his family for their unflinching support.

“Today, on the 14th of January, 1971 makes it exactly 50yrs I ascended the throne of my forebears as Alaafin. It was a dream come true, a prophesy foretold that the heavens had accented to when I wrote that piece of article and published it “I SHALL BE NEXT ALAAFIN”.

In the post which she shared via her official Instagram page, she put up a video of the monarch where he danced joyfully in the midst of people and musicians as other rulers sprayed him money.

The excited queen who noted that staying on the throne has not been easy also shared throwback photos of her king and arranged them according to age.

Queen Dami eulogised her king in Yoruba and also wished him long life, good health, and wealth on the throne.

Meanwhile, Bioreports earlier reported that after about 20 years, the Alaafin of Oyo paid a visit to the Soun of Ogbomosoland, Oba Oladunni Oyewumi Ajagungbade III.

The Oyo traditional monarch was ushered into the palace of Ajagungbade III on Saturday, January 2, where the duo tasked Nigerians on peace and unity.