– Taking to his Twitter page, he also shared pictures of his parents standing next to their lovely gift

A young man recently made his parents and the world proud after sharing some exciting news. Taking to Twitter, @datkidROBO shared a picture of himself and his parents standing next to a brand-new car which he had just bought for them.

“Never thought that the first car I bought would be for my parents. All love to them though, they deserve this and so much more.”

Many people were all there for the positivity. Many of them headed to the comment section to commend the young man on this wonderful achievement. They also congratulated his parents on their new baby.

“Congratulations to them, and God bless you for being so kind.”

“Wow, well done, and congratulations to the family!”

“Pops mean mugging it but deep down homie is proud.”

“Congratulations, this was also my plan that if they were still around I was gonna buy them a new car but God had other plans… Oberekile”

“This is beautiful, you did well man.” 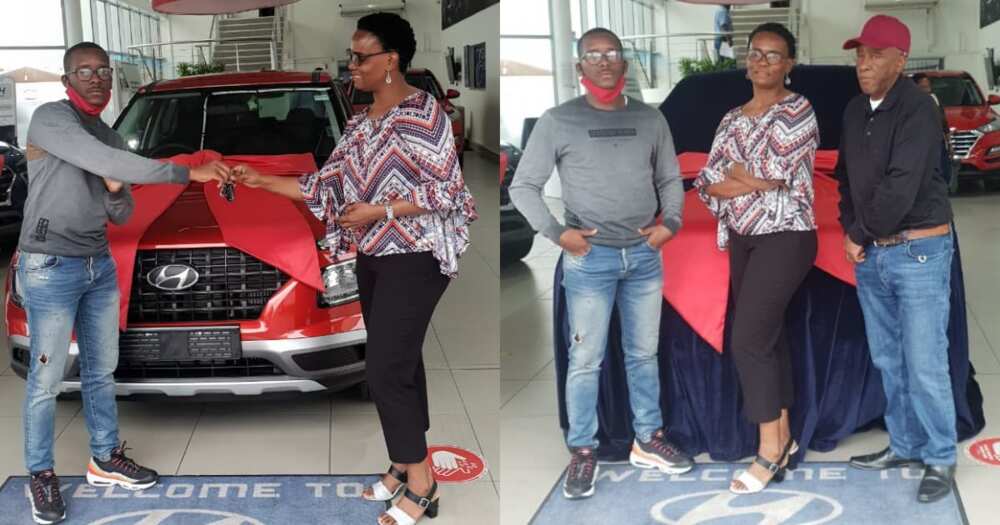 Mzansi loved a post made by a man who just bought his parents a new car. Source: @datkidROBO
.

Meanwhile, Bioreports earlier reported that Mvuyo Makhasi became famous after sharing his story about his father’s hard work despite not having the best ride.

The young man explained that his father had driven his iskoroko (old vehicle) everywhere after him, saying that:

“My dad has been driving iskoroko all my life. He drove me to prize-giving evenings at school, debate tournaments, even my registration at Wits.”

But this has changed due to Makhasi’s hard work and, in a small way, through his father’s as well.

Makhasi revealed that he had managed to give back, gifting his dad with a new car and feeling blessed to be able to do so.