– The mother-of-two was the centre of attraction at the plenary session as she shouted “Order! Mr Speaker” to signal Obasa’s arrival

A 33-year-old woman identified as Oyindamola Olorogun has made history as the first female to bear the mace (symbol of authority) at the Lagos House of Assembly.

The Sergeant-at-Arms could be seen signalling the arrival of Speaker Mudashiru Obasa as she shouted “Order! Mr Speaker”.

Everyone in the chamber was surprised as she led the speaker into the building for proceedings. The Sergent-at-Arms Corps of the Lagos House of Assembly was recently enlarged to include female members, and Olorogun is one of the few females that were included. 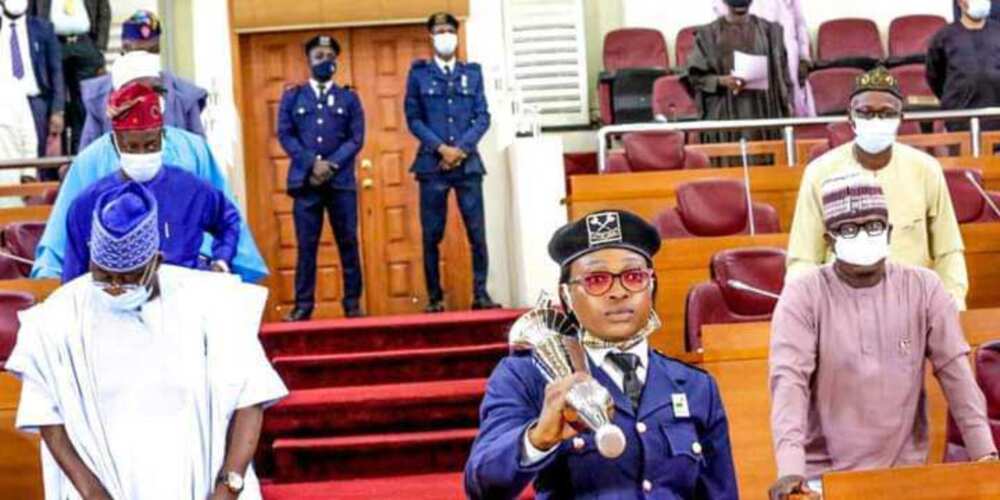 Olorogun is a mother-of-two who joined the Lagos House of Assembly Service Commission in 2019.

She is an HND graduate of Moshood Abiola Polytechnic, Abeokuta, Ogun state.

While some Nigerians were impressed with the news, others were, however, indifferent as they wondered what was so special about a woman carrying the mace. Below are some of the comments:

“The exemplary leadership style portray by Rt Hon Speaker Dr. Mudashiru Ajayi Obasa for the opportunity given to a woman in line of her duty. As they say ‘What a man can do, a woman can do better’. Proudly Oyinda!”

“I have been searching for that so special thing that makes a woman carrying a mace so special to be listed as achievement. I am yet to see it… maybe, my sight is bad.”

In other news, a Nigerian lady identified as Ruth Inomina has joined other citizens making the country proud abroad as she was recently commissioned as a second lieutenant in the United States Army.

The disclosure was made by a compatriot on LinkedIn named Justice O. Derefaka, who implored Nigerians to congratulate the young lady.

In recent times, Nigerians abroad have been making the country proud through their achievements in their fields of endeavour.