– Although the boy’s face and body are covered with the marks, he still appears extremely handsome in the photos

Photos of a handsome-looking black boy with huge birthmarks have got thousands of people who spotted them reacting massively on social media.

In the images seen by Bioreports on the personal handle of @whotmaan, the social media influencer indicated that he saw the pictures elsewhere and could not resist the temptation to share them.

The marks were spread all over the young boy’s body with the huge piece spread on his face but he looked amazing regardless. 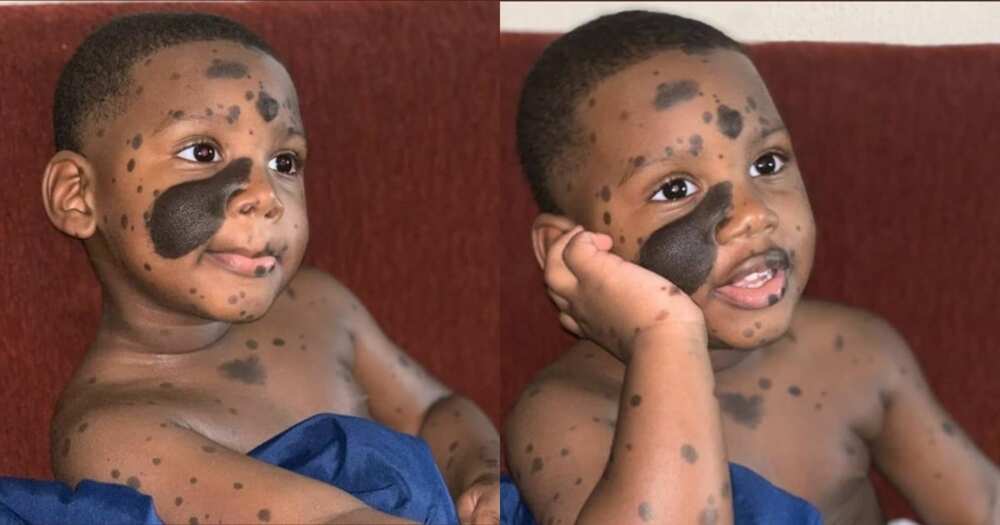 Check out some of the photos below:

“U all that do this stuff sha… Forget it’s hypocritic… Bcuz u knw deep down why u posted it. Nothing irritates more than the comments. Everyone n everything is beautiful it’s own way. Don’t use style at someone’s expense to chase clouts… Mtccheww..”

“The truth be said, this is not beautiful. The ones on the face is too large. It would have been a perfect beautiful birth Mark if not for the Big ones on his face. The boy is handsome though.”

“The baby is cute to me, I don’t see any imperfections at all, I mean coz someone doesn’t look like u an I doesn’t make them any less perfect. It’s completely beautiful, and yes it might be a dermatological condition or a polygenic disease, I doubt if this would have a cure tho.”

Meanwhile, Bioreports had earlier reported about a generation inspired photoshoots that trended on social media.

A social media user identified as Daddy Mo (@therealdaddymo), took to Twitter, with a photo post that has gathered over 14,000 social reactions on the online platform.

The adorable picture is a generation photo that featured four men from the same family, different generation, striking a warm pose for the camera.