– Talented Nollywood actress, Funke Akindele-Bello, has taken some time off work to chill with her family

All work and no play makes Jack a dull boy, which is why popular Nollywood actress, Funke Akindele-Bello, who recently released a movie, decided to holiday and cool off in Dubai like some of her colleagues in the industry have been doing lately. 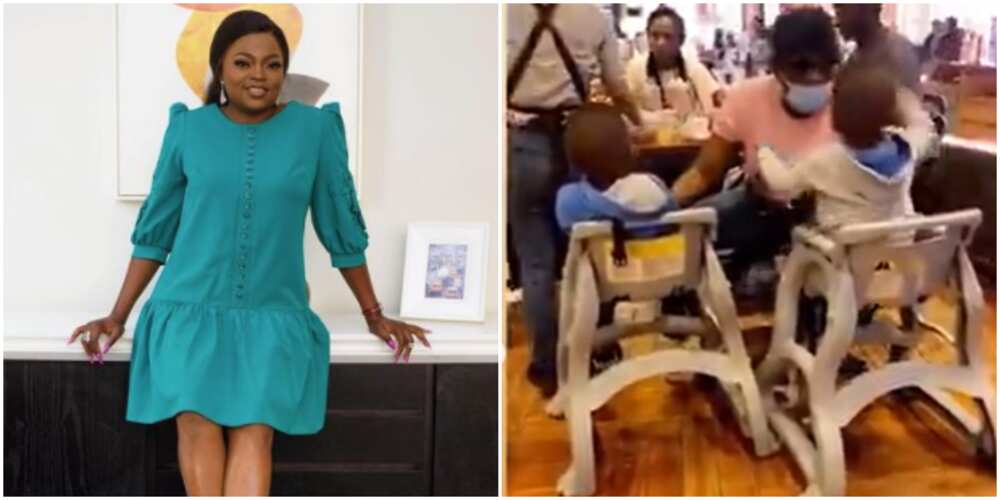 The filmmaker did not go alone, she was spotted in a series of adorable videos shared by Kemifilaniblog on Instagram in the company of her lovely twin boys.

In the first clip, the proud mum who had a branded t-shirt on played excitedly with the boys, giving them high fives and thumbs up at different times in a restaurant as they sat in their toddler chairs.

In subsequent clips, Funke who replied a man who said that she would die if she ever went under the knife, tried to grab their attention by singing a song, but the boys simply ignored her and played about the room.

In other news about the Nollywood movie star, Bioreports earlier reported that Funke Akindele-Bello’s fanbase just increased and continues to grow.

She has hit the 12M followers mark on Instagram, which makes her the Nollywood actress with the highest number of followers on the app.

The excited movie star did not only announce and celebrate on social media, she also posted a customised photo to mark the occasion.

The mum of two who was clearly excited by the feat thanked her fans for their love and support and declared them the best.