Top Nigerian music star, 2baba’s wife, Annie Idibia, no doubt has a lovely figure and she takes to social media to show it off from time to time.

Just recently, the mother of two shared series of videos on her Instagram story where she was spotted looking dapper dressed like a young and hippy girl.

The actress who cut her hair again said that it seemed the year 2021 would be a no-makeup one for her except there were special events.

She also admitted that she felt so perfect in her body and added that her husband is a lucky man.

See screenshots of the posts below: 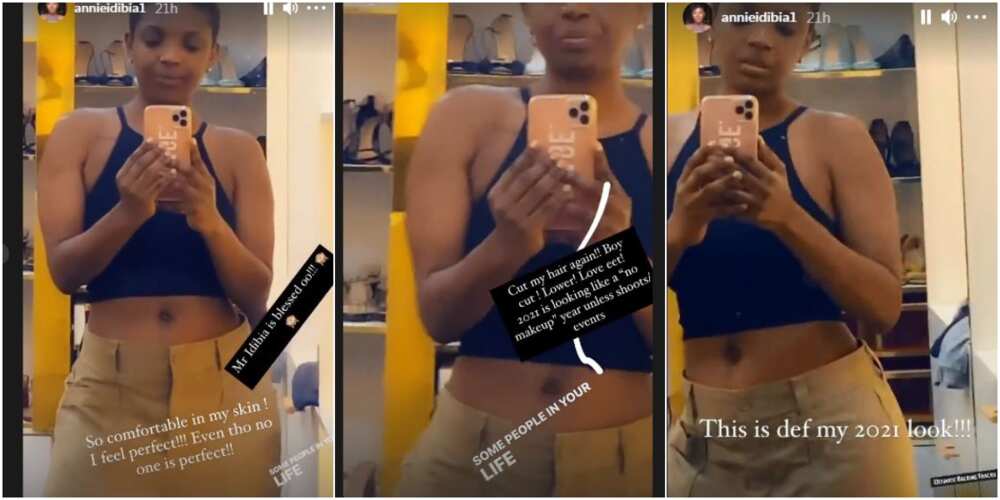 Also on the actress’ timeline, her first daughter, Isabel, was seen marvelling at her mother’s good looks considering that she was wearing her own clothes. She said she did not understand how a 36-year-old woman looked like a 16-year-old.

According to Isabel, she looked the way her mother was supposed to look. Annie also admitted that she was indeed wearing her daughter’s clothes.

In other news related to the actress, Bioreports earlier reported that Annie celebrated her second daughter, Olivia’s bravery, after a successful leg surgery.

According to the mum of two, Olivia is a brave and strong child. Talking about her role as a mum, Annie stated that it is not an easy job. However, she noted that being her daughter’s parent is different.

Top 3 Celebrities: Who Is The Humblest One – Don Jazzy, Tuface Idibia or Genevieve Nnaji? | Bioreports