– Talented Nollywood actor, Lateef Adedimeji, recently paid his respects to one of the top kings in the country, the Ooni of Ife

The Ooni of Ife, Oba Adeyeye Enitan Ogunwusi, turned a new age on October 17, 2o2o, and the day did not go unnoticed by Nollywood actor,Lateef Adedimeji.

The talented film star took to his social media page to dedicate a post to the top monarch in the country.

Adedimeji shared photos from his visit to the king at his palace and followed the snaps with a caption where he praised him as he turned a new age. 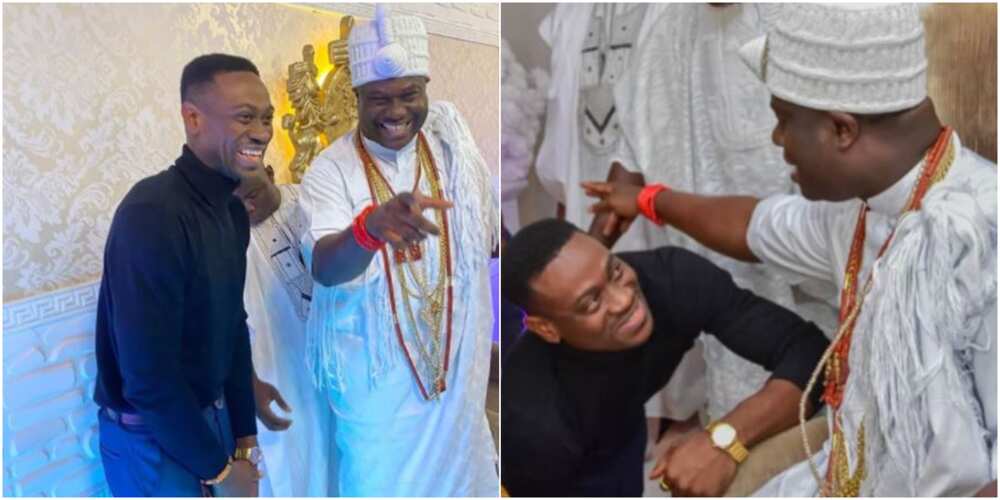 Actor Lateef Adedimeji made sure to celebrate the Ooni of on his birthday.
Photos: @adedimejilateef / IG.
Source: Instagram

The actor prayed for the grace of God to never depart from the king and he went further by thanking Oba Ogunwusi for all that he does.

The film star continued his birthday message by expressing his love for the king and also praising him in the traditional way befitting for kings.

Happy birthday father , may the grace olodumare never depart from you. Thank you for all you do . I love you kabiyesi, igba Odun , Odun ni kan ni lase edumare @ooniadimulaife”

In other related news, Bioreports earlier reported that Nollywood actress, Eve Esin, clocked a year older on October 17 and she took to her social media page to celebrate with fans.

The film star shared photos of herself in a unique outfit as she showed off her sultry side.

She wore a gold mini-dress with white feathers that made fans liken her to a fairy. The actress also accompanied the post with a caption where she gave God all the glory and thanked Him for letting her see a new year.