– Popular Nigerian singer, 9ice, was recently embroiled in a scandal on social media after he cheated on his wife, Sunkanmi, less than a year after their marriage

– The singer’s ex-wife, Toni Payne, was dragged into the mess by trolls who also accused her of cheating on the singer during their marriage

– Payne reacted to the allegations by calling them false

Top Nigerian musician, 9ice, recently got fans talking about his marriage after he cheated on his newly married wife, Sunkanmi.

The music star was seen in a viral video with another lady in a hotel room and he was heard calling the unknown lady his wife as he warned other men to stay away from her.

As expected, the scandalous video led to crisis in his marriage and also kept people on social media busy.

The singer’s ex-wife, Toni Payne, was also dragged into the situation by online trolls who also claimed that she cheated on 9ice during their marriage.

They arrived at this conclusion because of a song the singer had made in the past.

Well, in a post shared on Instagram story by Payne, she slammed those who accused her of cheating on her ex-hubby. She added that the song in question had nothing to do with her and that she even mixed and mastered the song.

She then went ahead to curse those who accused her wrongly and said that they would never know peace and favour. 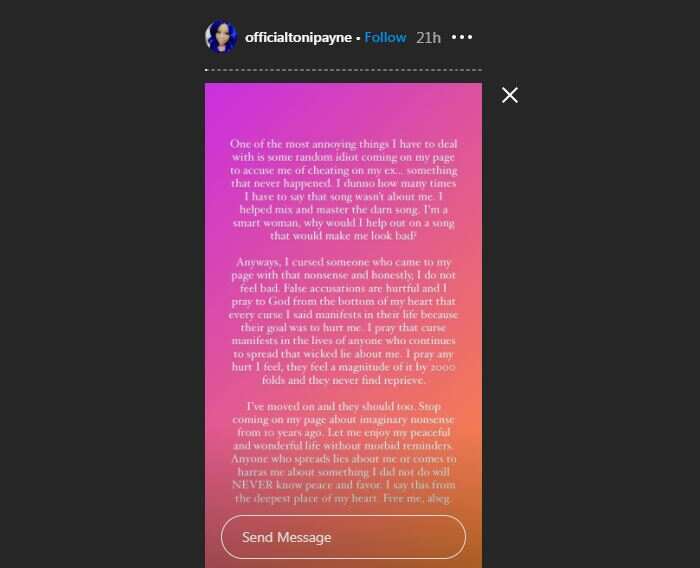 9ice’s ex-wife Toni Payne has reacted to claims that she also cheated on the singer during their marriage.
Photo: @officialtonipayne.
Source: Instagram

In other news, Bioreports earlier reported that Toni Payne recently disclosed that 9ice was the only man who broke her heart.

She described the crash of their marriage as a blessing in disguise as she got an amazing son out of it.

Tony Ogunlowo SIR: We saw how the revolution led by the late Jerry Rawlings in the early eighties cleaned up...