5 Nigerian celebrities who have good relationships with their step children

Many times on social media, stories make the rounds of wicked stepmothers or fathers who go all out to frustrate the other children of their partners.

The Nigerian film industry also did not help matters by focusing most of their stories on this ill, with only a few of them telling positive stories about the relationships stepmothers have with their stepchildren.

It is now more popular for a man to marry just one woman but this has not stopped men with kids from their previous unions from getting married. 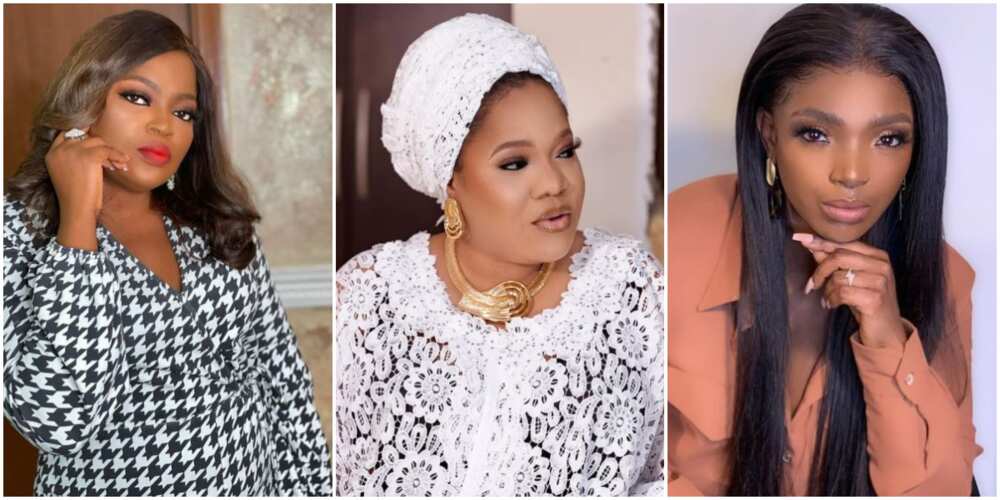 Some Nollywood stars have shown that they get along well with their stepchildren.
@funkejenifaakindele @toyinabraham @annieidibia01
Source: Instagram

As a result, there are a number of young ladies who find themselves being stepmothers to their husband’s other children, including celebrities.

Bioreports has decided to shine the spotlight on some Nigerian celebrities who have good and enviable relationships with their stepchildren.

This veteran Nollywood actress got married to divorcee music maker, Abdulrasheed Bello aka JJC Skillz. Their union has become a thing of admiration as they constantly dish out couple goals.

JJC having kids from his previous union has not affected their marriage and Funke also seems to be on great terms with them. They celebrate each other’s birthdays and even take family holiday photos together.

This young Nollywood actress caused quite a buzz on social media after it was gathered that she was getting married to much-older billionaire businessman, Ned Nwoko, as his fifth or sixth wife.

She married into an obviously large family with many wives and children. This however hasn’t stopped her from having her fun or showing great love to her husband’s other kids.

She has been known to share an enviable relationship with her stepdaughter, Esther. On Valentine’s Day, the singer’s daughter melted hearts on social media with the gifts she presented to her step mum.

This Nollywood actress and wife to legendary singer, 2baba, is another celeb deserving to be mentioned on this list. Despite having two kids for the music star, she is still on great terms with her husband’s five other children and even their mothers.

When 2baba celebrated his birthday, Annie reached out to one of the mothers of her step kids, Sunmbo Adeoye, to be the event planner for the surprise party.

This Nollywood actress is usually called mother by her husband, Kolawole Ajeyemi’s daughter.

They celebrate each other’s big days and openly show love and respect to one another.