– Kalu made the statement in Port Harcourt on Thursday, February 18, during a project inspection

Orji Uzor Kalu, the Senate chief whip, has declared that the governor of Rivers state, Nyesom Wike, would soon join the ruling All Progressives Congress (APC).

The Nation reports that the senator made the declaration while addressing journalists after Wike had led him on a project inspection around Port Harcourt, the state capital on Thursday, February 18.

Bioreports gathered that some of the projects inspected were Rumuokoro Flyover bridge, 2nd Artillery Flyover Bridge, Real Madrid football Academy and the Mother and Child Hospital in Rumuomasi. 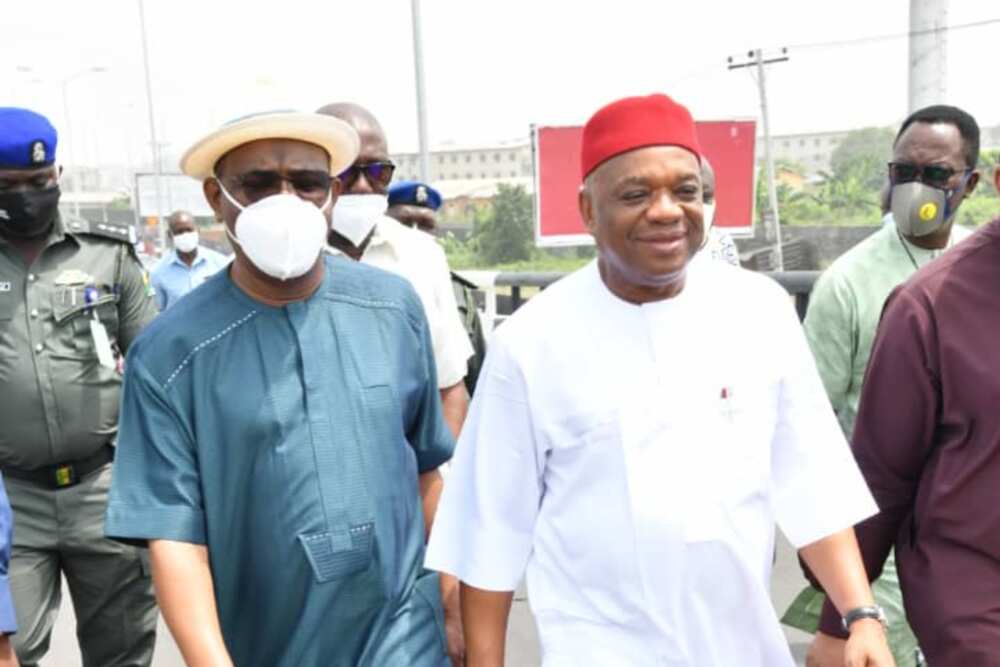 The APC chieftain, who commended Wike for his investments in critical infrastructure, called on the governor to work harmoniously with the APC.

“He (Wike) is a man needed by us in the APC, it is my belief that a messiah can come from anywhere. I urge the governor to partner with the APC, I discussed with him all through the night to find a common ground with the APC. I believe that very soon it shall come to reality.”

“So I urge Governor Wike to soft-pedal on our party, humans can switch from one party to another which is human behavior in Africa. I appeal to him to partner with us so that the good people of Rivers can benefit more from the federal government of Nigeria.”

Meanwhile, Bioreports had previously reported that the Rivers state chapter of the Peoples Democratic Party (PDP) reacted to former minister Femi Fani-Kayode’s meeting with some leaders of the ruling All Progressives Congres (APC).

It was reported that the state publicity secretary of the party, Sydney Tambari, on Tuesday, February 9, said the former aviation minister is free to defect.

Tambari said Fani-Kayode enjoys the freedom of association, hence the reason his defection cannot come as a surprise.

He, however, said the minister has not officially forwarded his resignation of PDP membership to the national leadership of the party.

In a related report, Governor Wike denied playing down the possibility of Bola Tinubu emerging as president of Nigeria in 2023.

The governor was earlier reported to have told journalists on Thursday, February 4, that the presidency would be way out of the reach of the national leader of the ruling All Progressive Congress (APC) in the next general elections.

Wike was said to have advised the politician to forget about pursuing the presidency and channel his energy to other profitable ventures.

He addressed PDP leaders in the southeast on Monday, February 8, in Enugu, to reconcile Anambra stakeholders, adding that winning the governorship election is crucial to the PDP household.

Wike said all stakeholders must unite and work together in order to avoid a scene that played out in the Ondo election in which the All Progressives Congres (APC) won.