42 seconds ago by
Tunde Ososanya

– Kenneth Akobundu, a 19-year-old Imo state indigene, has built a unique motorbike that looks like a helicopter

– In recent times, Nigerian teenagers have been displaying their creativity and it further proves how blessed the country is

A 19-year-old boy from Imo state has built a unique motorbike that looks like a helicopter and has got people talking on social media.

The teenager identified as Kenneth Akobundu rode his motorbike around as a group of people watched in admiration.

The video of the invention was posted on LinkedIn by Ndubuisi Ekekwe and Nigerians have shared their thoughts on the motorbike. 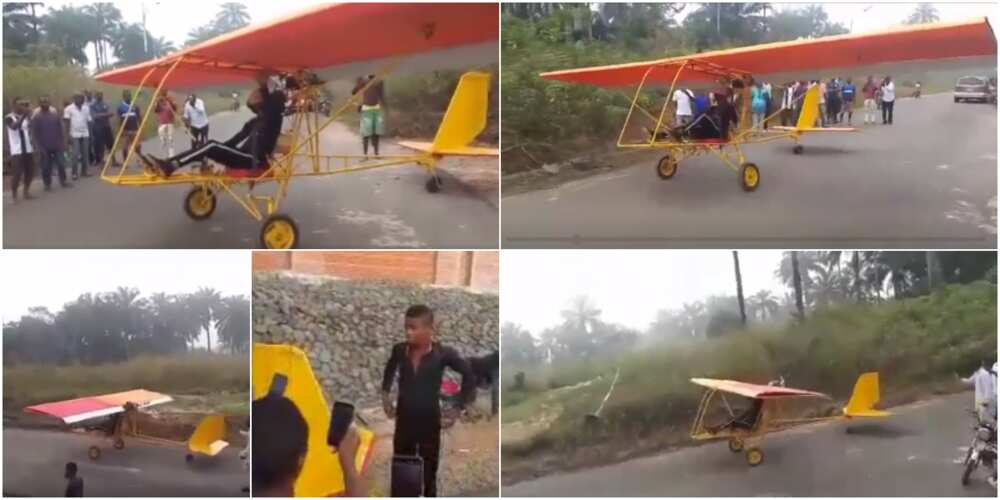 OPB Opia noted that the young boy sacrificed a lot of resources to build the motorbike, adding that people would assist him in proceeding to the next stage if they were aware.

He wrote: “If people can imagine what personal resources of his got him to this stage, they will rather put up links to resources that will help him proceed to the next stage. Innovators are driven by imaginations….”

Engr Babatunde Segun wrote: “This is one of the people government must train and develop their technological ideas to develop our nations productivity ideas. Where is Ministry of Science and Technology?

“Not all Nigerian youth are lazy, please encourage home grown ideas and invention. Let the boy be trained to work with Defence and Security institutions in producing locally our own goods.”

Olúwatóbi Williams B wrote: “The video reminds of a popular image of the Wright brothers during flight. That was over 100 years ago. Kenneth has done exceptionally well to build this. Prof, if I had a chance to speak with Kenneth, I would tell him to direct this energy to build drones and quadcopters because that way, we may still have an edge in developing systems peculiar to our terrain.”

In other news, a young Nigerian man identified as Tosin Arogundade has invented a pressing iron that uses gas.

Tosin said he alongside one other person had been working on the project for three years, adding that their invention is up to standard.

YouTube’s recommendation system is criticized as harmful. Mozilla wants to research it – Bioreports

YouTube's recommendation system is criticized as harmful. Mozilla wants to research it - CNET

Why Akeredolu is best for Ondo, by Sanwo-Olu

By Emmanuel Oladesu  Lagos State Governor Babajide Sanwo-Olu on Monday urged the electorate to vote for the All Progressives Congress...

We will replicate our success in Ondo, says IGP