– One part for orphanages, the second for the building, the third for her family and the final part for her savings

Popular child comedian, Emmanuella, has finally opened up on why she built a house for her mother and how she was able to do it.

The 10-year-old star had left many people impressed after she unveiled the beautiful house she built for her mother on social media.

Many people applauded her for doing such a big thing for her family at a young age and she has now spoken on how it became possible. 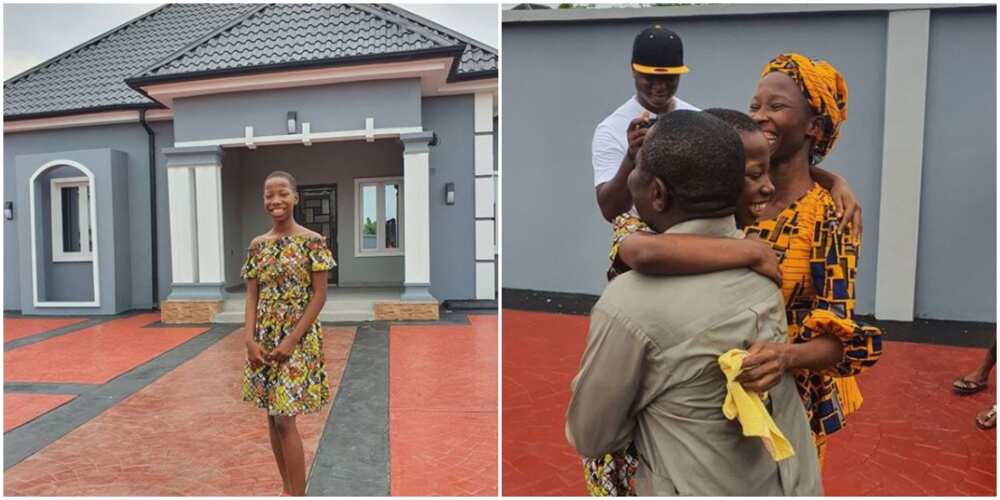 10-year-old Emmanuella spoke on how she was able to build her mother a house.
Photos: @officialemanuella
Source: Instagram

In an interview with BBC Pidgin, Emmanuella said it all started with her plan to buy her father a car and then her Uncle Mark reminded her that she also promised her mother a house.

Mark advised her to save the money towards building the house first. This led to Emmanuella contacting her manager to split her earnings into four parts.

The 10-year-old explained that one part was meant for the orphanage, the other part was for building the house, the third part for her family and the final part was to go to her savings.

Emmanuella said the building project started in December 2019 and it took about a year to complete it.

The young lady was very impressed by her parent’s reactions to the house especially after seeing her mother’s smile. She said her mother deserved even an estate but she was not that buoyant to afford it.

Emmanuella also said she was still going to buy her father the car she promised him and it would be a nice one.

Little Emmanuella as she is fondly called quickly captured the heart of millions of people in Nigeria and beyond with her comedy skit with Uncle Mark of the Mark Angel Comedy when she was barely six years old.

In an exclusive interview with Bioreports, Uncle Mark revealed that Emmanuella was his neigbhour’s daughter and just picked on her when he needed a young child to feature in one of his comedy skits and their journey to success started from there.

She has since performed her trade in many countries of the world on special invitations.